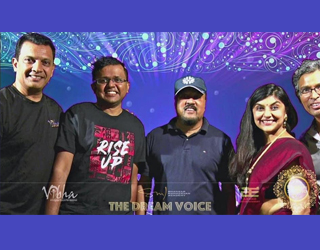 The Dream Voice virtual fundraiser was organized by VIBHA in partnership with Shankar Mahadevan Academy and Anand Entertainment. The online singing contest received an overwhelming response from across the globe. It attracted close to 400 entries that came in across all continents. The entries were divided into three categories: Little Champs (age 3 to 13 years), Teen Champs (13-19 years), and Super Champs (age 19 and above). The top 20 contestants were selected by preliminary round judges: Rekha Pallath, Sid Philar, Anamika Pal, and Ram Durvasula. The names of the contestants were posted on the website as votes poured in for public choice awards.

Another team of extremely talented judges, each of whom has their mark in the music industry, came on board for the final judging: Bollywood/ Playback singers Bhavya Pandit and Nihira Joshi, Indian Idol contest runner up Nitin Kumar, PVNS Rohit also of Indian Idol fame, and International Pop Soul artist Avanti Nagral. These five, along with selection contribution from Shankar Mahadevan Academy, adjudged the winners.

On Sunday, June 14, 2020, was the grand finale of the contest where Prabir Das and Ruchi Iyengar took the viewers on a two-hour fun and entertaining journey which was shown LIVE on the Vibha YouTube channel and Vibha Facebook page which together had about 6000 views. Winners were announced in 3 groups - US, India, and International sections for each of the Little champ, Teen champ and Super champ categories. People poured their love and votes for their near and dear ones through the Public Choice Awards which was a separate category. A pledge drive during the finale gave people the option to donate which they did generously to help VIBHA raise a whopping $31,000 dollars. Everyone was mesmerized by the phenomenal singing talent which they witnessed.

The India winners have been awarded with the opportunity to sing for VIBHA advertisement, while the US winners will be sharing the stage with a celebrity in a Bollywood concert organized by Anand Entertainment.

Passionately supported by VIBHA volunteers, the event was sponsored by Six Consulting and was conducted in partnership with Shankar Mahadevan Academy, Anand Entertainment, and Bytegraph Productions. It was co-hosted by Heritage School of Performing Arts, Neeshon Radio, Harshad Raipure Films, Awesong.in, and Gaata Rahe Mera Dil. Please see our website for a full list of all winners.