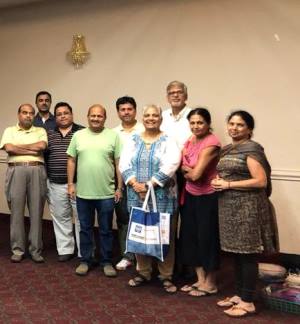 (Left) Some of the volunteers preparing for the conference.

Vishwa Hindu Parishad of America organized its Dharma Sansad, 7th Hindu Mandir Priests Conference, a part of Hindu Mandir Executive Conference, at the Global Mall, Norcross, Georgia on July 20-21, 2018. Participation from priests, temple management, and temple youth groups has been increasing. Represented at the conference were 23 temples and religious institutions across the USA, with 18 priests as well as others from temple management, scholars from the USA and India, and about 15 youth group members.

The theme of the well-attended and inspiring conference was “Dharmo rakshati rakshitah” (Dharma protects those who uphold or protect dharma). The learned priests and scholars shared many insights and enlightening nuggets of wisdom on Hindu religion, with the common thread in the discourses and talks being the need to lead an upright and religious life.

Discussions were held on “The Role of the Priests and Acharyas in Spiritual and Cultural Well-being of Communities.” Hindu temples and institutions are facing challenges around the globe as social changes are affecting traditional beliefs and practices related to Sanatana Dharma. Priests discussed how these trends are affecting practicing Sanatana Dharma, what are the challenges faced by next generation of Hindus, and how to make rituals more relevant to devotees in general.

Topics included importance of rituals such as yajnas and yaagas in practicing Sanatana Dharma, esoteric meaning of rituals through examples, and how to involve youth in performing rituals such as pujas and involving the devotees in preparing for larger events such as havan.

On the concluding day, Pundit Gyan Prakash ji gave a riveting talk on the meaning of Dharma, different kinds of dharmas, and Sanatan dharma (unchanging and abiding principles of dharma). He said that dharma encompasses more than rituals. It includes duties, rights, and righteous living. One must carry out one’s duties in family, society, or nation in a morally upright way to ensure peace and harmony for all.

VHPA is inspired by the lofty ideal of Vasudhaiva Kutumbakam, i.e. the entire creation is one family.

Videos:
Pundit Gyan Prakash Upadhyay's videos include many from the conference.