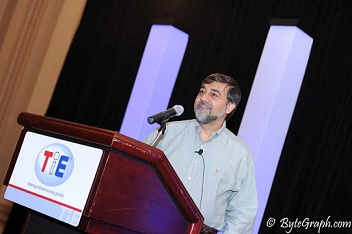 Designed with the theme “Unleash the Entrepreneur Inside,” TiE Atlanta in association with TiE chapters in the Carolinas and Florida presented their program this July 16 th and 17 th at the Renaissance Atlanta Waverly Hotel. Forty-eight entrepreneurs and companies had the opportunity to showcase their products and services to venture capitalists, institutional investors, attendees and prospective customers. Adding interest was the presence of Hannibal Navies, Retired NFL Player, Founder/CEO of 360 Sports Academy, dedicated to developing student-athletes into leaders.

The Friday agenda included panel discussions. The “Venture Capital – A Southeastern Perspective” panel consisted of Fred Sturgis - H.I.G. Ventures, Jeff Muir – Fulcrum Ventures, Glenn McGonnigle – TechOperators with Joan Herbig – ControlScan as moderator. Networking was seen as key. Determining an investment was a difficult issue: some believed in a disciplined approach, while all agreed that investors had almost quadrupled their due diligence before investment, due to current economic conditions. The panel noted that Atlanta had everything to offer: an international airport, universities, talented professionals, better cost of living, the weather, and a business friendly atmosphere.

The second panel, “Angel Capital – How It Can Be Your Saving Grace,” had Sig Mosley – Imlay Investments, Robert Franklin – Global Angel Investor Network, Mike Eckert – Atlanta Technology Angels, Suresh Ramamurthi – BC Capitol, with Ashish Mistry – BLH Ventures as moderator. While most panelists agreed that investing is for the money, Sig Mosley added that it was also to build communities; Mike Eckert said that he had evolved to giving back while making more, and Bob Franklin smiled as he said he loved money and an entrepreneur. Desirable characteristics of an entrepreneur are persistence, passion, knowledge of business, and ability to communicate well. Due diligence by angel investors was emphasized: Bob Franklin advised knowing when to quit; Mike and Sig advised to learn the market and the competition and to seek good advice; and Suresh was interested in the cash flow and building a plan that is scalable, replicable and sustainable.

The second day opened on a room of 200 people for a speech from J.David Power, III, the founder of J.D. Power & Associates, a firm based upon customer satisfaction data and consultancies since its founding in 1968. Power highlighted the idea of every entrepreneur’s basic fundamental principle: taking a risk. Before leaving your comfortable job to pursue the kitchen-table idea, as he had done, “you better know what your market is before you start investing your time and money.” He spoke of the big break he received with Toyota, and his company’s push into the mainstream when a ground-breaking study on Mazda’s engine failures was published on the front page of The Wall Street Journal in 1973: within 48 hours, Power’s company came into the limelight. “I didn’t see myself as an entrepreneur, but I wanted to change the rules so [the company could hear what the customer was saying].”

Vivek Wadhwa, adjunct professor at Duke University and a columnist for BusinessWeek.com, debunked stereotypes of entrepreneurs (unmarried, rich, obsessed with money, college dropouts): “Average entrepreneurs are between the ages of 39-44, have children, and do not come from rich families.” As lead author of a nationwide study on immigrant entrepreneurs, Wadhwa found that 52 percent of Silicon Valley startups had one or more immigrants as a key founder; moreover, of all immigrant-founded companies in the past decade, 26% had Indian founders. Risk, this biggest hurdle for any entrepreneur, is a minor detail amongst immigrants as they have already taken the biggest risk of all: moving to a new country.

However, there is a downfall from having so many innovative foreign nationals. “The U.S. visa system is restricting many people from planting a new business here [by having] many on H-1B [temporary work visas],” says Wadhwa; they risk not getting a renewal or waiting a lengthy time for permanent residence. “Additionally, over 1 million people are waiting for their [permanent resident] card,” although only 120,000 can be approved per year, with an 8,400 persons quota per country. This is causing a “reverse brain-drain” as many are moving back and establishing companies in their home country. Having visited India twice in the past 6 months, Wadhwa pointed out that he met almost 250 entrepreneurs, most of whom had returned to India because of the immigration hurdles in the U.S. “Unlike Australia or Canada who have welcome centers and make it easy for immigrants to blend in and become a part of the country, the U.S. visa system never gives a chance,” said Wadhwa. “The U.S. is losing this innovation and it is a huge threat to the United States that Indians are going back.”

Charles E. “Gus” Whalen, chairman of The Warren Featherbone Company in Gainesville, GA—a 127-year-old company founded by his great-grandfather, E.K. Warren—focused on the role of a crisis within a startup. He entertainingly described how in 1938 the crisis brought on by the invention of plastic changed the company’s featherbone corset inventory to plastic covers for diapers to baby clothes—which then faced another crisis when manufacturing jobs moved overseas. “When you are faced with a crisis, you have got to forgive yourself, and let go,” said Whalen, who engaged the audience with humor and sincerity. “You have to turn a crisis into transition.” The company’s Foundation is focused on philanthropy and has conceived the “401P,” or Personal Philanthropy Accounts, with legislation being considered in Congress to amend the tax code so that individuals may invest in their society through their employers or individually. The author of four books, he received a standing ovation on his spirited and passionate talk.

Twelve panel sessions then covered topics from start-up life cycles, to intellectual property, healthcare, social media, and more. Financial regulation has “shifted the value from banks to merchants,” said Steven Karp of SunTrust Bank. “The new legislation is going to change the way banks offer products to merchants.” In a panel about healthcare technology, doctors who experience the day-to-day changes with technology advised that if entrepreneurs are to develop the next technology, they must visualize healthcare in 2019, after the last portion of the healthcare reform has taken place.