"We Too Sing America" book party with Deepa Iyer 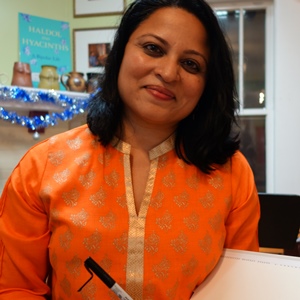 “Books give us the context for what’s happening in the moment,” explained Elizabeth Anderson of the nonprofit Charis Circle, as she welcomed the packed audience at a book party for nationally renowned activist Deepa Iyer’s We Too Sing America at Charis Books in Little Five Points (Atlanta) on December 8, 2015.

Iyer’s book focuses on how, as her subtitle says, “South Asian, Arab, Muslim, and Sikh Immigrants Shape Our Multiracial Future.” After 9/11, these groups have seen incidents such as the 2012 massacre at the Sikh gurdwara in Oak Creek, Wisconsin; the violent opposition to the Islamic Center of Murfreesboro, Tennessee; the police attack on Sureshbhai Patel in Alabama; and various incidents around Georgia.

Iyer identifies as a woman of color, an immigrant, and a Southerner, and feels the double grieving resulting both from acts of violence and from the backlash that follows them. With people being detained and deported and others feeling unsafe even in traditionally safe places of worship, she says that “our work is welcomed but we are not truly welcomed.” She therefore wrote her book We Too Sing America in part to document experiences as she taught Asian American studies classes in the University of Maryland; to make connections between the three forces of hate violence, Islamophobia, and xenophobia in America; and to call South Asians to action.

Iyer asks whether hate crimes should be considered domestic terrorism; she explores the role of the state in perpetuating racism through detentions, national registration programs, police profiling, and constant surveillance. She considers movements such as those of undocumented youth and Black Lives Matter. 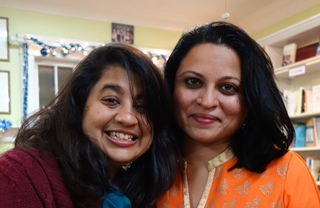 On hand were representatives of the event’s sponsors.

Aparna Bhattacharyya, Executive Director of Raksha, (photo left) reported that bullying and accusations of terrorism are even leading some students to drop out of school; survivors of abuse are often afraid to seek help if they think their immigrant status might be jeopardized; and Muslims who are no problem at all are being asked for apologies and reform.

Sharmin Sadequee (above), whose brother was unjustly imprisoned, spoke on detention and civil liberties. Son Ah Yun (above right), the Deputy Director of Programs and Policy of the National Asian Pacific American Women’s Forum (NAPAWF), spoke of the “perpetual foreigner,” Chinese exclusion, and Japanese internment, all related to current threats from politicians today.

As her book’s title declares, there is no conflict between being a good American and a good South Asian, Arab, Muslim, or Sikh. By 2043, people of color are expected to be the majority in the US, and America must begin to understand and take the transformation gracefully. 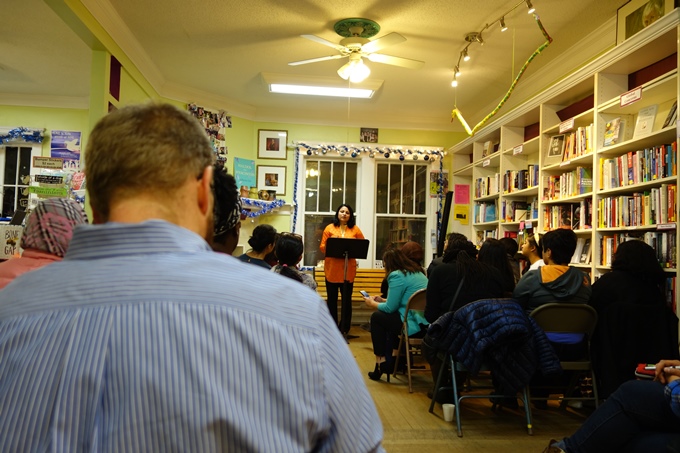