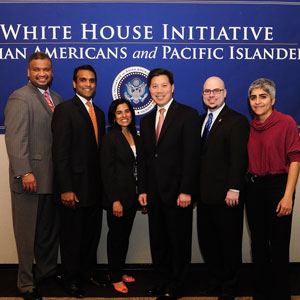 On March 16, 2012, Emory University hosted the first White House conference on Asian American issues for our region since 2002. Arranged by the White House Initiative on Asian Americans and Pacific Islanders (WHIAAPI) and called the AAPI Southeast Regional Action Summit, it was held to promote three-way conversations:

Why did it come about? According to the 2010 Census, AAPIs are the fastest growing minority in the USA. They make up 3.2% of the population in Georgia, having had an 82% growth since 2000. Other Southeastern states have experienced rapid AAPI population growth as well: Alabama: 71%, Florida: 71%, South Carolina: 64%, Tennessee: 61%. For highlights of The Asian Population: 2010 [PDF], released 3/21/12, see http://www.census.gov/newsroom/releases/archives/2010_census/cb12-cn22.html

Kiran Ahuja, Executive Director of the WHIAAPI and a top official at the Dept of Education, was one of those participating. She’s also a Georgia native. She has said, “The state of Georgia now boasts more than 300,000 AAPIs, from schoolchildren to business owners and professionals in science and the arts. … Poverty, employment discrimination, health disparities, and barriers to education … continue to affect diverse communities of all races, including AAPIs in the South. With a growing population comes an urgency to address the needs of these Americans.” [For her full comment after the summit, see our Website Bonus Features below—also a sampling of notices from WHIAAPI.]

Immigration and education: hot topics. Nearly 12.6% of AAPIs live below the poverty line (compared to 12.4% of the national population). Of the total AAPI population 25 years and older, more than 13% do not have a high school diploma. Access to college education is being restricted in Georgia. The number of bilingual AAPIs has also risen, and the U.S. Census has noted that 37.6% speak English “less than very well”—yet state laws are being passed that people can only take drivers license exams in English or get certain services only if they speak English.

On the other hand, federal programs are expanding language help and attempting to address job needs of those in poverty. The Summit itself demonstrates the willingness of the Administration to listen. In fact, Christopher P. Lu, WHIAAPI Co-Chair, worked in Obama's Senate office, was executive director of the Transition Project, and as Cabinet Secretary, the New York Times described him as "one of the highest-ranking Asian Americans in the Obama administration." We have assurances that the results of the summit will go to the highest offices. 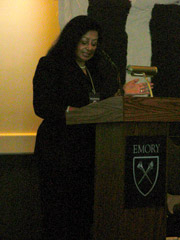 
The Immigration session, for example, amply demonstrated the amount of work to be done. The representative from the Public Advocate Office discussed his work on reviewing cases to make sure detention is warranted. However, other speakers cited cases such as single mother Keong Sook Hwang in New Jersey stopped for a broken tail light on her car and detained, her children going to foster care. Students from the Georgia Undocumented Youth Alliance told of hardships leading their parents here, then growing up here and now being told they could not continue their education—is this good for anyone? As for deportation, over 45% of recent deportees had no criminal record. In the first half of 2011, 46000 deportees with American children had to leave 5000 children here in foster care, so we are spending to break families and then pay for foster care.

Kiran Ahuja reminded us that for every spelling bee winner there are many students struggling; for every doctor or lawyer there are hundreds more small business people. The Bhutanese, for example, spoke of needing translators for health care. Mississippi fishermen told of illness and encounters with predatory attorneys after the oil spill. A Korean restaurant owner spoke of small business troubles with banks.

On the positive side, Chris Lu talked about the benefits to AAPIs of the Affordable Care Act, and about taking away tax deductions from companies that outsource jobs. Shyam Reddy advised on contracting and promised to set up a meeting for small business outreach. By the end of the town hall, officials were saying that they did not want to see families separated, that they were moved by stories from students, and that they were very concerned that states should not move toward discrimination. Kiran Ahuja noted, that, can you believe, we sound like activists here, seeing how much more needs to be done! She exhorted people to take advantage of WHIAAPI conference calls, webinars, the listserve, to apply for grants, to file complaints when necessary—noting that there was a disconnect in use of services and between the actual and the potential. For example, the President wants comprehensive immigration reform and needs the support of Congress, but “we don’t hear Asian-American voices on it…We need you.” She commended the "great effort, strength, and courage in this room." 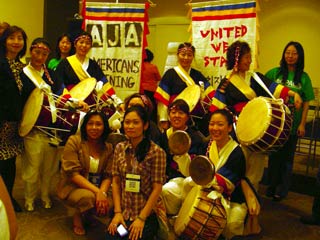 Bonnie Youn, Host Committee Chair, expects a video and summary to be made available, and an action plan may result.

Kiran Ahuja's blog entry after the Summit:
“As I return to the state where I grew up, I cannot help but marvel at the tremendous growth of the AAPI population.

“The state of Georgia now boasts more than 300,000 AAPIs, from schoolchildren to business owners and professionals in science and the arts. The growth has been robust, and with time, the expanding AAPI population will make its voice heard more and more.

“With images of my days at Spelman College still in mind, this summit was a kind of homecoming for me. As I walked the same streets that I did growing up, everything felt so familiar – yet with significant growth in the AAPI population, I know it is not the same.

“Growing up in Savannah, I had always felt different. Though I desired to fit in with others at school, everything about me and my brother stuck out: we looked different, our names sounded different, and no one else understood what it was like to be Indian American. My parents spent much of their time in the inner city running a medical clinic, and as I began to better understand their work, it dawned on me that perhaps others around me felt just as different as I did.

“My parents’ clinic provided more than just medical necessities – it was a hub for social services to underserved African Americans. From working with the local housing authority to filling out SSI forms to advocating in court, my parents served important needs through their clinic, striving to help their patients overcome not only medical challenges, but economic and social barriers as well. Following their model, I became involved in advocating on behalf of the African American community as a college student at Spelman College, a historically black women’s college.

“Poverty, employment discrimination, health disparities, and barriers to education – these were some of the issues that affected those around me every day. And today, they continue to affect diverse communities of all races, including AAPIs in the South. Of the total AAPI population 25 years and older, more than 13% do not have a high school diploma. The number of bilingual AAPIs has also risen, and the U.S. Census has noted that 37.6% speak English “less than very well.” With a growing population comes an urgency to address the needs of these Americans.

“The 2012 White House Initiative Southeast Regional Action facilitated valuable exchanges and made strides in amplifying AAPI voices in areas like civil rights, small business, housing and health. As members of the community convened in Atlanta, the rich civil rights history backdrop is a reminder that there is still work to be done, and that the fight for equal access and opportunity is a continual process that requires passion, commitment, and the collaborative effort of relentless individuals.
------------
For highlights of the Census report, The Asian Population: 2010 [PDF], released 3/21/12, see http://www.census.gov/newsroom/releases/archives/2010_census/cb12-cn22.html
------------
One popular speaker was UGA's Hines Ward, now on the President's Advisory Commission.
Link: http://thestir.cafemom.com/sports/134831/hines_ward_retires_but_heres
Video: http://www.channelapa.com/2011/02/hines-wards-story.html
-----------
Since the Summit, WHIAAPI continues to be busy. Here is a sampling of notices from them. Such notices can be seen on Facebook or by signing up to receive emails.

Business: WHIAAPI connects us to government programs such as the free training series called the Government Contracting Classroom about contracting with governmental agencies, offered by the Small Business Administration (SBA). WHIAAPI has regular Web Chats on different topics such as SBA certification programs, or women's small business programs.

Education: On April 11th, WHIAAPI co-hosted a conference on “Expanding the AAPI Voice in National Policy” at the National Education Association.

Health: WHIAAPI is listening to individuals and groups. It just participated in a conference call with the U.S. Department of Health and Human Services Health Resources and Services Administration (HRSA) on HRSA's Blood Stem Cell Program and other initiatives important to the AAPI community. It discussed the efforts of the Team Janet Campaign, which arose from one Chinese college student's plea for help and which encourages AAPIs to increase participation in bone marrow drives around the country.
It held a Web Chat on the Affordable Care Act with Dr. Anand Parekh, Deputy Assistant Secretary for Health. It is now tracking health data more precisely with more categories for race on health surveys; the data will be used to address special challenges for our populations, including hepatitis B-related disease, diabetes, cancer, cardiovascular disease, hypertension and infant mortality. And Chris Lu has just been touting the cost saving and wellness benefits of yoga and meditation at a White House roundtable on alternative rehabilitative therapies!

Immigration: These issues are recognized as becoming of much greater importance in the Southeast with the rise of anti-immigrant legislation.

Jobs: Since the start of the Obama Administration, HUD has increased Section 3 reporting by jurisdictions from 20% to 80%. Section 3 Business Registry programs help recipients of HUD financial assistance provide low-income residents with job training and employment, as well as contracting opportunities for the companies that hire them.

Remittance Transfers (sending money home): An estimated $14 billion was sent back in remittances to South Asian countries, but safety and fees cause concern. The Consumer Financial Protection Bureau (CFPB) has adopted new rules to go into effect in February 2013, making the costs of remittances clear and holding remittance transfer providers accountable for certain errors.

Sex trafficking and forced labor: The former is actually a problem in Atlanta. A recent Web Chat discussed what the government is doing and what communities can do about these issues.