Home > Magazine > Around Town > Will Hinduism survive the 21st Century?

Will Hinduism survive the 21st Century? 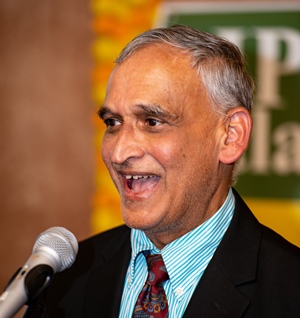 Indian Professional Network (IPN) organized a dinner meeting on Thursday, June 20, 2019 at Ashiana Restaurant, Norcross. Around 75 - 80 members attended the meeting to listen to and bid farewell to the speaker of the evening, Dr. Ravi Sarma, who is moving to Washington, D.C.

Dr. Jagdish Sheth, Professor of Marketing at the Goizueta Business School of Emory University, introduced Dr. Ravi Sarma, MD, FACP, as an extraordinary individual who has not only achieved professional success but also given back to society generously.

Dr. Sarma is a well-known community leader among Indian-Americans. He was very active in the early days of the Indian American Cultural Association (IACA) and equally engaged as one of the cofounders of Hindu Temple of Atlanta. 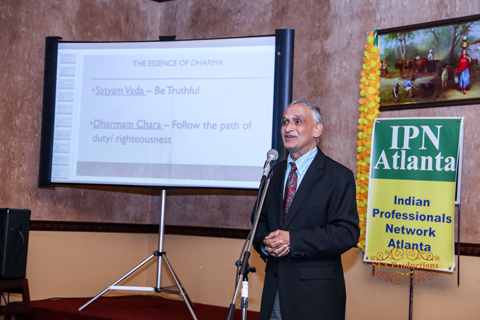 (Left) The event was both a speech by Dr. Ravi Sarma on Hinduism, and also a farewell to him from his beloved Atlanta community as he moves to Washington, D.C., to be closer with grandkids.

Dr. Sarma then addressed the gathering on the topic of Hinduism in the 21st century. Urging his listeners to examine this grave matter with objectivity, he expressed his concern about the survival of Hinduism and its ancient values, given the onslaught of modernization. Even in India, the birthplace of Hinduism, contemporary education and thought have created a distance between Hindus and the belief systems of their forefathers, he said. As for Hindu children growing up in other countries, he opined that no matter how much emphasis families place on biculturalism and bilingualism, the fact remains that their children are growing up in a milieu that is greatly at variance with Hindu thought—and hence his anxiety that Hinduism is perhaps only a generation away from going into oblivion. 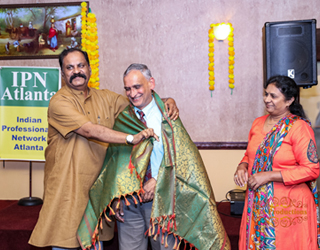 (Left) Dr. Sarma is felicitated with a shawl.

Several leaders from other organizations also shared their experiences and warmly thanked Drs. Seshu and Ravi Sarma. Ravi Ponangi served as emcee. The meeting concluded with a vote of thanks proposed by Rajan Vedak, IPN member. Dr. Sarma was felicitated with a shawl.

Dr. Sarma explained that he formed his understanding of how others can see us differently and misunderstand Hinduism, partly from taking visitors to the Hindu Temple of Atlanta on tours and hearing their questions and partly from his attempt to answer questions on Hinduism on ask.com. He shared some of the questions he was posed:
Why do you worship Satan? (Shiva with a trident is misunderstood by some as Satan.)
Isn't that child abuse? (Durga’s foot on the child is misunderstood by some as child abuse.)
Which religion is better? Some religions encourage conversion because they believe their God is better, but Hinduism is tolerant of other religions because of the belief that God is one.