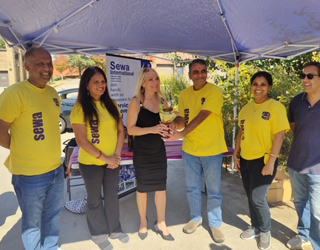 The chief guest of the day was Dr. Syamala Erramilli along with her husband Bob Erramilli, a Johns Creek City Council member, who were accompanied by Vikas Arora, a Sewa volunteer. They inaugurated the event with a prayer to Lord Ganesha and the traditional lighting of the lamp. Dr. Erramilli emphasized how important it is for women to stay active and motivated so that they can be good role models for their children. She also advised how staying active helps one avoid depression.

Complimentary lunch and drinks were provided to the participants under the guidance of Amaresh Parvathaneni and Murali Rajgopalan.

This was followed by the afternoon session which was graced by the presence of Raj Razdan, founder and executive director of Senior Citizens Program, Inc. She also highlighted the importance of women’s well-being and staying active. 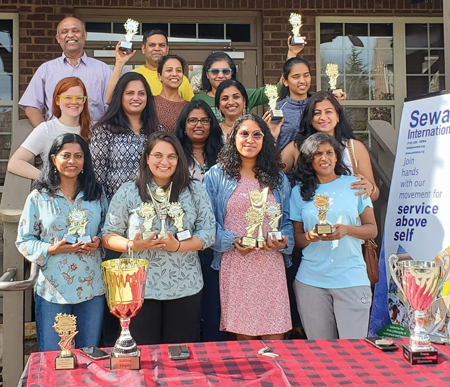 Veena Rao, founder, publisher, and editor-in-chief of NRI Pulse, was the chief guest for the morning event. She was accompanied by the president of Sewa’s Atlanta chapter, Srikanth Gundavarapu. Rao spoke about the importance of “sportswomanship” and how giving one’s 100percent is more important than winning. Gundavarapu agreed and said that active women in the family help the whole family in maintaining a healthy lifestyle. 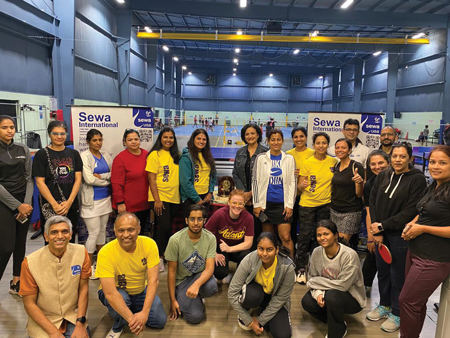 Anila Shaikh won the singles in table tennis, Pallavi Panthri came in second, Divya Seshadari was third, and Shraddha Javeri was fourth. The doubles were won by Padma Jyothi Padala and Tarana Malik; in second place were Divya Seshadari and Anagha Srinath; third were Vrishali Deshpande and Pallavi Panthri, and fourth were Zalak Khatri and Pooja Rajpoot.

This was followed by an early afternoon event, graced by the presence of Dr. Debra Miller, who has 21 years of oncology experience, highlighted the importance of sports and exercise on health as well as the sisterhood fostered in this process. She also presented cricket and kho-kho champions with their trophies.

The evening’s chief guest was Jyothi Chintalapudi, founder-director of Kuchipudi Dance Academy. She enthused all the evening participants with a motivating speech and presented the awards to the winners of the badminton championship.