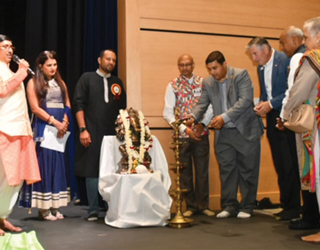 The Atlanta chapter of Ekal Vidyalaya Foundation USA was proud to present Niche Entertainment's "Ye Jo Des Hai Mera" dance and music program on Saturday, September 17, 2022 at Berkmar High School's new auditorium. The Broadway style dance and musical program, "Story of a Nation," beautifully and imaginatively conceptualized and directed by Milind Oak and narrated by Nachiket Devasthali, was embellished by two sound and light specialists and performed by eight proficient music and dance artists. Milind Oak has a personal connection with Ekal having visited an Ekal school in 2015.

The grand show was attended by over 275 guests including Mark Gonsalves,a successful businessman and GA’s 7th Congressional District's candidate, and his wife; Dilip Tunki, Council Member for the City of Johns Creek,whose help and support for the upcoming Diwali celebrations this year has been appreciated by the

The evening program included a sumptuous dinner enjoyed by all in the Meet-and-Greet hour and also hot tea served by VHPA. The show started with a warm welcome by composed and suave emcee Neetu Singh Chauhan. Ajay Upadhyaya, the Regional Vice President, led the Ekal youth volunteers in singing the U.S. and the Indian national anthems. The students then connected the audience to Ekal's cause of education in remote, rural villages of India by quoting Oprah Winfrey, "Education is the key to unlocking the world, a passport to freedom.” Ekal is doing this by making the villagers literate and bringing the world to them on computer buses!

The audience was then treated to a mesmerizing 75-year journey of India through melodious live music, dances, trivia, interviews, and vintage speeches. It opened with singing and dancing to the rousing patriotic song Vande Mataram while archival newspaper clips, images, and videos were projected on the huge screen in the background, taking the audience down memory lane—from Jawaharlal Nehru's iconic “Tryst with Destiny” speech on the eve of independence through the pain of partition and Mahatma Gandhi’s shocking and heartrending assassination.The live songs which accompanied more images were Bharat humko jaan se pyaara hai and Dil hai chhotasa, chhotisiasha. Sardar Vallabh bhai Patel's vision was highlighted with Chhodokal kibaatein, kal ki baatpuraani, nayedaurmeinlikhenge milkar nayi kahaani, humHindustani! Visions worth emulating today, tomorrow and always.

The audience was treated to the very significant and memorable achievements of the new nationand significant changes in Bollywood with the emergence of new stars, Eastman colorfilms, and several live songs from that era.

The 1962 Chinese aggression clips shown onthe screen accompanied by the moving song Ai mere watanke logon, zara aankh mein bharlo paani brought a tear to many an eye as they paid homage to their beloved iconic singer,Lata Mangeshkar as well as to the brave soldiers who laid down their lives fighting valiantly for the nation. The same sentiment waselicited in the songs, Apni azadi ko humhargizmitasaktenahin and Mere desh ki dhartisonaugle, ugleheeremoti. 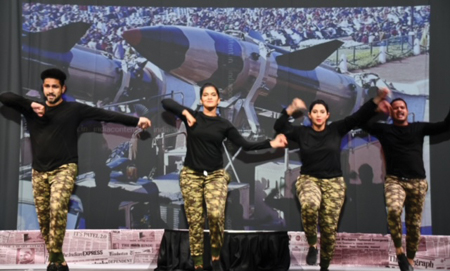 Ekal is proud to continue on the road shown by MS Swaminathan, the Father of India's Green Revolution, who said "If agriculture fails, everything else will fail." Through organic farming, vermiculture, and measures to prevent rural flight by introducing programs in villages, the youth are not forced to migrate to cities in search of employment.

The extravaganza strung along all the accolades received in the field of sports, with special footage for cricket and hockey, highlighted IT firms which have made a name worldwide, India's space program, Oscar wins, auto manufacture, “Make in India” initiative and several others to the tune of blessings showered by film Raazi's song Ai watan, mere watan, aabaadrahetu.

The show was such a fantastic encapsulation of India's 75-year history that Mark Gonsalves and his wife stayed till the very end of the program even thoughmajor portions of the program were narrated in Hindi. Mrs. Gonsalves said that they thoroughly enjoyed and understood most of the program because newspaper and video clips in English were being projected simultaneously.

Ekal is a big player in the story of India. The seed of education was sown by the Foundation in 1989and now has sprung to cover over 80,000 villages. Preeti Tanwar's presentation highlighted Ekal's one-teacher school model which exists in all the Indian states for an annual sponsorship of only $365. The Ekal program of free basic primary education has been expanded to formalize vocational training, social empowerment,and healthcare for adults and thus has been used to bring about far-reaching changes in neglected villages of India and Nepal. 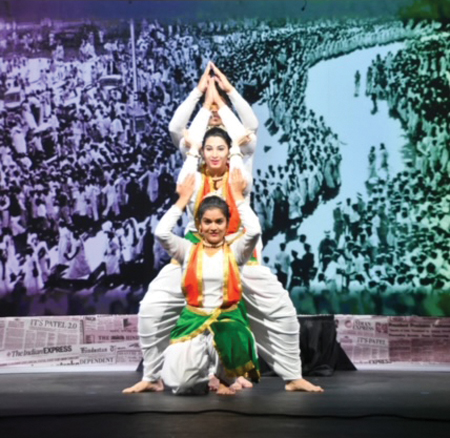 Ekal's Telemedicine and Tailoring Centers have beenvery active during the Covid-19 pandemic producing much-needed masks and providing training to local women to use mobile phone-based telemedicine tool kit to help triage common ailments or connect to a doctor using videoconferencing.

Ekal's long-time school supporters, Harbans and Malti Singla, donated $30,000 this year to fund a new tailoring center which will empower many trainees in a new village. The audience was wowed with screenshots of a trendy fashion show which modeled the chic dresses created by Ekal tailoring school graduates.

The appeal that “$365 is a small sum but has such a huge impact” was so powerful, that people were excited to sponsor Ekal schools and in no time over 200 schools were sponsored! Sponsors are able to track their school at www.ekal.org, connect with Ekal on Facebook and Twitter, or visit an Ekal school as part of the Vana-yatra program.

The show closed with the Rajasthani invitation to visit Bharat with the popular song Kesarivabaalamaaonipadhaaromhaaredes or simply visit Ye Jo Des Hai Mera. For your next travel plan, please take up Milind Oak Group's invitation and visit India and while there try to see an Ekalschool in session, you will be amazed at how well it functions with such few resources.

The enthusiastic,engaging, much appreciated, and enjoyable extravaganza for an uplifting cause left many asking for repeat performances.