Home > Magazine > Around Town > Young artists draw up “My world, My future”

Young artists draw up “My world, My future” 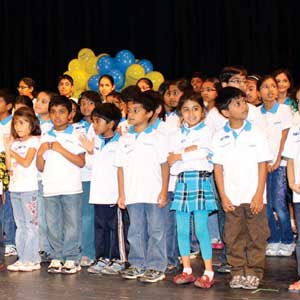 This Page:  A few of the large number of children are shown who enjoyed creating artwork for the contest.

GlobalArt held its 2nd National Competition last Sunday, October 30th at North Gwinnett High School, Suwanee. The competition, held each year, is a great way for students to apply techniques learned and skills acquired from being in the art program.

Students from as young as 4 to as old as 13 competed within their respective groups. Younger students and beginners focused on their coloring and basic drawing techniques while the older students focused on advanced color shading, intermediate drawing, and full composition. The competition began at 1pm with students ready to bring their ideas, based on the theme “My World, My Future”, to life. Older students, who were required to fully compose their artwork, were given extra time.

At 3pm, a Cultural Show was held for parents as they waited for their kids to finish the competition and assemble backstage for the Award Ceremony, at 4pm. Neelima Gaddamanagu of the Nrithya Nithya Kala Kuchipudi Dance Academy began the show with a classical dance. Mr. Ram Durvasala followed with karaoke hits, supported by singers Navya and Sneha. As the students arrived backstage, the cultural show wrapped up with another classical dance and additional singing performances.

Mrs. Sudha Gopalakrishnan, Director of GlobalArt USA, began the award ceremony. First, winners of "PTSA Reflections" at the School Level were announced. These students will go on, hoping to also be recognized in the County, State, and National Levels.

Mr. Mustafa Ajmeri of India Tribune gave out the prizes to winners and participants. Champions of each group were recognized as follows: Ruya Jiwani for Group A, Anoushka Misra for Group B, and Anika Vennel (previously a Doodle4Google State Finalist) for Group C. This year, the Champions were offered the exciting prize of $700 towards an air ticket to the GlobalArt International Competition to be held in Vietnam or, if unable to travel, a 4-Day, no-expiration Hopper Pass to Disney World Resorts!