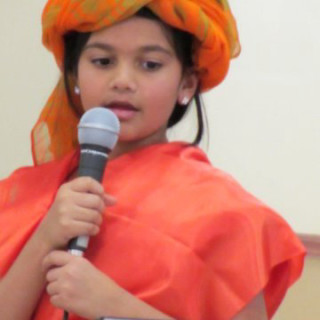 Rhea Singi from VHPA Cobb Bal Vihar, dressed in a bright orange robe as Swamiji did 120 years ago, started the children's section of the program at Global Mall with great aplomb, with a very informative PowerPoint presentation on Swami’s life.

Swami Vivekanada was born 150 years ago, on January 12, 1863. The Hindu Swayamsevak Sangh USA Inc. (HSS) began a year-long observance of this sesquicentennial anniversary with special events at over 100 locations nationwide, attended by over 6,000 participants and guests. 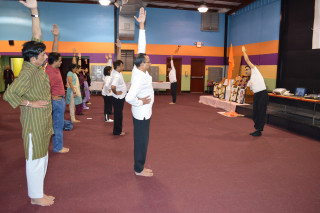 Photo, right: Ravi Ponangi and others participate in a yoga session. 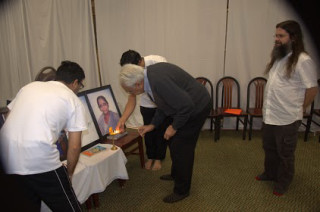 Photo, left: Pranab Lahiri (in the center) and Ian Boccio (at right) spoke at one of the gatherings.

Ian Boccio, founder and chant leader of the kirtan group Bhakti Messenger, spoke about Swamiji's influence on American lives, and hoped that programs like this will bring American yoga practitioners and Indians together for bigger roles.

The Ladies Wing of HSS celebrated with haldi kumkum on Makar Sankranti in very traditional way. Sneha Mehta and Anita Houde gave inspirational speeches on dharma and Sankranti. At the Hindu Temple of Atlanta, the highlight for the day was Karanam Arjun, a youngster who appeared as Swami Vivekananda and gave his speech. 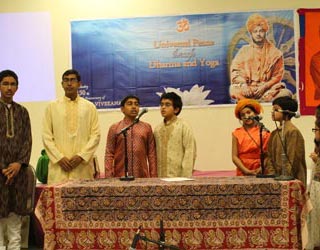 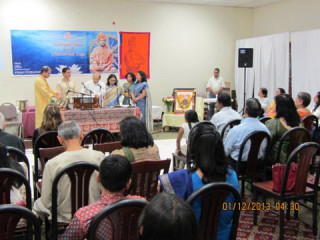 Vedic prayers (above left) by children and youth were followed by lighting of a lamp in front of Vivekananda’s portrait as a mark of devotion to him. Each organizer discussed Swamiji’s short lifespan of 39 years, devotion to his guru Shri Ramakrishna Paramahamsa, relentless pursuit to awaken the spirit of the people of India, his visit to America, and universal spiritual message. Sandhya Swaminathan from Chinmaya Mission Atlanta delivered Swamiji’s powerful speech in the World Conference of Religions in Chicago in 1893. Amitava Sen and his team of wonderful singers (above right) brought melodious Bengali songs conveying the spirit and message of friendship of Swami Vivekananda. 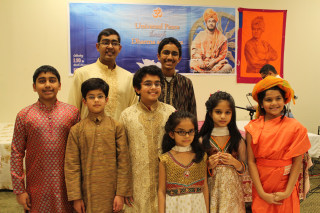 Then, since Swami’s message must be carried forward by the coming generation, came children and youth. Rhea Singi (on right ) from VHPA Cobb Bal Vihar, dressed in a bright orange robe as Swamiji did 120 years ago, started off with a very informative PowerPoint presentation on Swami’s life; children from Gwinnett Bal Vihar, Pulkit Gupta and Neil Pathak, followed. A youngster from the same Bal Vihar, Mukund Loiwal gave his speech in fluent Hindi. Sadhana Dhurba from Chinmaya Mission Gwinnett Bal Vihar concluded this part with Swamiji’s message on Tolerance. These young future ‘Vivekanandas’ stole the hearts and minds of the audience with their oratory skill, poise, and simple but powerful language. 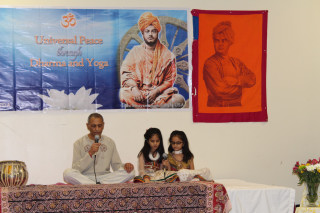 Devotees and Vedantic scholars, including Dr. Bhagirath Majmudar, Sneha Mehta, and others, paid glowing tributes to Swamiji’s mission and making Hinduism a powerful force in the West. After a Q&A session with Dr. Uma Majmudar and others, Arvind Chhiba and his granddaughters rendered a beautiful Hindi song on Swamiji as a fitting finale for the program.

Mr. Manhar Valand gave a vote of thanks, followed by social time with tea and snacks, thereby bringing an end to a most exiting event, celebrating the 150th birthday of the great sage of India, Swami Vivekananda.

HSS will conduct other events in 2013 as part of its observance of Swami Vivekananda’s 150th birth anniversary: a Dharma Bee, a nationwide quiz contest for children; programs for high school and college students, such as a traveling exhibit visiting major university campuses; “Vacation with Vivekananda” excursions to locations in the U.S. where Swami visited; and a culminating “Dharma and Yoga Fest,” scheduled simultaneously on a regional basis to commemorate Swami Vivekananda’s groundbreaking address at the World’s Parliament of Religions in Chicago on September 11, 1893.

Website Bonus Feature
Text:
This report contains additional material not in the print/digital issue, about some of the various celebrations around Atlanta besides that at Global Mall.

Video:
Rabindrasangeets at Swami Vivekananda 150th Anniversary, Atlanta
Bengali Songs at Swami Vivekananda's 150th Birth Anniversary Celebration in Atlanta, GA. Jan. 12, 2013
Includes 3 Rabindrasangeets sung in a choir:
"Dhwanilo Aobhano Modhuro Gombhiro"
(The call has risen, sweet and deep, amidst the morning sky.
From the horizon, in the temple of the universe, the song of Peace is playing.
Sing out in waves of sound, to the confluence of friends from east and west,
In a society where the bond of Friendship is the holy mantra.)
"Aloker Eyi Jhornadhoray"
(Cleanse me with this waterfall of light),
"Amar Mukti Aloye Aloye"
(My salvation is in the glow of the sky).
Left to right: Tabla, Shekhar Pendalwar; Singer: Saibal Sengupta; Harmonium & Singer: Amitava Sen; Singers: Sriparna Das, Debasri Dutta, Mousumi Karanjee.