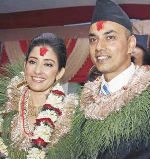 Like the rest of the world, Bollywood has been in the grip of football fever. While Shah Rukh Khan, along with his kids, flew down to South Africa to watch the semi-finals and finals, Imran Khan landed there to watch the finals. “I’m not a huge fan of football but it’s a once-in-a-lifetime experience to watch the FIFA finals,” said SRK. Lara Dutta , too, was there. Those who couldn’t make it to South Africa, like the Bachchan family and John Abraham and Bipasha Basu, caught all the action from Mumbai.

Incidentally, Brazil’s Christiano Ronaldo is a hot favorite with Bollywood beauties like Amrita Rao and Mugdha Godse. They were all rooting for him and were heartbroken when Brazil lost to the Netherlands.

The big buzz this time is that Salman Khan has a new girl in his life and she is none other than his Veer co-star, Zarine Khan. Heads turned when the two walked in together well past midnight at Aamir Khan’s bash which he hosted recently in honor of the Oscar-winning Argentinian music composer Gustavo Santaolalla. Sallu and Zarine—who, incidentally, looks like Katrina—were also spotted together at the recently concluded IIFA awards held in Colombo.

Others who attended the do were Saif Ali Khan, Karan Johar, Imran Khan with his fiancée Avantika Malik, and Rajkumar Hirani, to name a few. Shah Rukh Khan and Ranbir Kapoor were conspicuous by their absence even though Aamir had invited both.

Leaving her bohemian past well behind her, Manisha Koirala tied the knot with businessman Samrat Dahal in a traditional Nepali ceremony on June 19 in Kathmandu. Besides Manya’s first hero in Bollywood, Vivek Mushran, who made it a point to attend the four-day extravaganza, as did Manisha’s good friend and director Deepti Naval, Jackie Shroff, Gulshan Grover and Sunita who stood in proxy for her husband, there was not much Bollywood presence on Manisha’s big day.

Apparently, the new bride has already signed her first film after marriage. She will be playing a politician in it.

Hussain is ‘fida’ over Vidya

After Madhuri Dixit, Tabu and Amrita Rao, MF Hussain is now fida over the charming Vidya Balan, whom he calls ‘gorgeous.’ The 94-year-old artist is so obsessed with the actress’ beauty and talent that he is said to have watched Ishqiya 12 times already. Thrilled with all the attention coming her way, Vidya reveals that not only does Hussain want to do a portrait of her, he is also keen that she star in his next directorial venture.

Meanwhile, Vidya and Rani Mukherjee are supposed to be bonding big time these days. They are co-stars in No One Killed Jessica, which is based on the real story of a Delhi model’s death.