Big B carries the Olympic torch 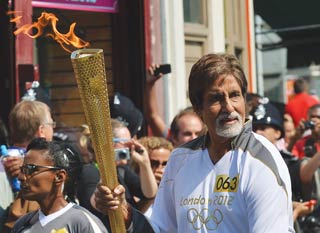 Amitabh Bachchan had the privilege of carrying the Olympic flame when it reached its last leg in London, a day before the spectacular opening ceremony of the 2012 London Olympics. Clad in a white tracksuit, Big B carried the torch for about 300 meters, with a jog and a brisk walk, amidst thousands of cheering fans.

Bollywood was represented at the inaugural ceremony by filmmaker Karan Johar, who accompanied Prime Minister Dr. Manmohan Singh, and Anil Kapoor who was there on the invitation of Danny Boyle (director of Slumdog Millionaire), who directed the ceremony. As it turned out, Anil was also invited by UK-based tycoon Lakshmi Mittal.