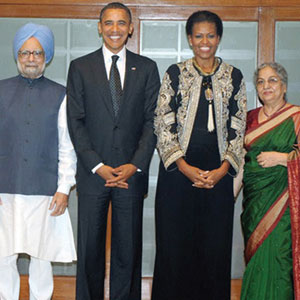 It was an evening when Bollywood and Obama charmed each other. At Prime Minister Dr Manmohan Singh’s private dinner for US President Barack Obama and his wife, Michelle, the film fraternity was represented by three eminent personalities. Aamir Khan, dressed in an off white kurta and churidar, Shabana Azmi in an orange Kanjeevaram saree with marigold in her hair and Javed Akhtar in a black sherwani, were among the 70 privileged guests at the elegant do. A beaming Shabana later said that “Obama told Javed that he was indeed lucky to have me as his wife!” The couple, on their part, were impressed with the way “Obama wears his power lightly.”

Aamir revealed that the gracious Michelle told him that she had danced to his title track from Rang De Basanti at an event in Mumbai.

Priyanka is a patakha, Shah Rukh a bomb!

It’s official now. Priyanka Chopra is the hottest actress, in other words, a patakha and Shah Rukh Khan, the hottest actor or a bomb! These titles were conferred on the two superstars after they emerged winners of an online Diwali poll. Piggy Chopps and SRK beat the likes of Katrina Kaif, Aamir Khan and Hrithik Roshan to come out tops. Salman Khan, predictably, was voted the Diwali Dhamaka, thanks to the spectacular success of Dabangg.

Talking of Diwali, the first to host the famous Bollywood card parties this year were Shilpa Shetty and Raj Kundra. The couple combined the occasion with a grand housewarming party as they have just moved into their new Juhu bungalow.

In his red and gold sherwani, Vivek Oberoi looked quite the ‘Prince’ as he tied the knot with Priyanka Alva, also dressed in red and gold, at the Alvas’ sprawling farmhouse near Bangalore in the presence of 500 guests, on October 29. From Bollywood, there was just Sushmita Sen along with daughter Renee, director Apoorva Lakhia and producer Ramesh Taurani. At the lavish Mumbai reception on October 31 hosted by the Oberois, there was a fair bit of Bollywood with Akshay Kumar, Tabu, Dia Mirza, Genelia D’Souza, Fardeen Khan, Sajid and Farah Khan, among others, dropping in to bless the newly weds, who looked resplendent in their velvet finery.

Incidentally, Abhishek Bachchan was nowhere to be seen at the reception, even though Vivek had extended a personal invitation to him.

Bipasha Basu is on cloud nine these days but admits she has butterflies in her stomach. Reason: the attractive actress has bagged her first Hollywood film, Singularity being directed by the well-known English-French director Roland Joffe. Bips says she met Joffe in a chance encounter at the Taj Land’s End Hotel in Mumbai in September last year after which things just fell into place. Set against the First Anglo Maratha War of the 18th Century, the movie is a riveting tale of love across two continents. To be shot in Australia and India, Singularity also stars Pearl Harbour star Josh Hartnett and our very own Abhay Deol