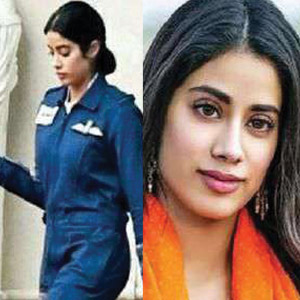 There is great news for fans of Janhvi Kapoor. The pretty actress will be seen in a film which is the complete antithesis of Dhadak, her debut film. Yes, Sridevi’s daughter will be playing Gunjan Saxena, Indian Air Force’s first female combat pilot in a biopic being made on her, titled Kargil Girl. Gunjan was awarded the Shaurya Chakra for showing exemplary courage and valor during the Kargil War in 1999.

Incidentally, Janhvi turned 22 on March 6 and was treated to a bash hosted by her half sister Anshula Kapoor.