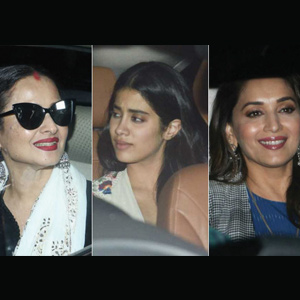 It was heartening to see that Janhvi Kapoor’s cheer squad at the special screening of her debut film Dhadak included her mother Sridevi’s contemporaries Rekha and Madhuri Dixit. The two veteran actresses were among the many Bollywood celebs who turned up to show their support for the pretty debutante as well as for the film’s hero, Ishaan Khatter, who is Shahid Kapoor’s half-brother.

Shahid’s wife Mira is expecting their second child. In fact, the doting husband hosted a baby shower recently at which the star attraction again was… Janhvi! You see, Ishaan and she are rumored to be a couple besides being co-stars.