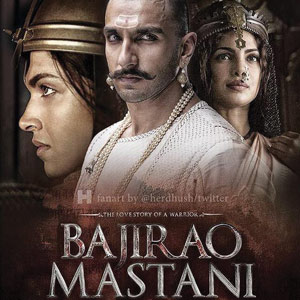 There are some things that one has come to expect from a Sanjay Leela Bhansali film: spectacular visuals, perfectly choreographed songs, and dazzling costumes. This grand and highly fictionalised period piece doesn’t disappoint on any of those counts. Where it does, ironically, is in the chemistry between Bajirao and his Mastani. Ranveer Singh and Deepika Padukone scorched the screen with their ardor in Ram Leela, but their romance here is sadly lackluster, sans full blown passion. Also, there’s hardly any plot to speak of!

The 18th century warrior-hero Peshwa Bajirao, played with élan by Ranveer Singh, takes on the clergy and his own family to uphold the dignity of the beautiful and courageous half-Muslim princess of Bundelkhand, Mastani (Deepika Padukone) after she arrives in Pune as his second wife. From the Maratha accent to body language, the spirited actor gets it almost perfect. However, it’s in the tragic scenes that he is truly brilliant.

Deepika Padukone makes a ravishing Mastani and she is impressive in the battle scenes but her character gets a bit tedious as it’s strictly one-dimensional. It is Priyanka Chopra playing Bajirao’s first wife Kashibai, who almost steals the film (despite fewer scenes) with the grace and dignity, also a touch of playfulness, that she lends to her character.

As in all Bhansali films, here too, the supporting cast come up with fine performances.

So, failings notwithstanding, do watch this colorful and dramatic extravaganza whose central message is that all religions preach love, but love has no religion. Bhansali’s very own Mughal-e-Azam! 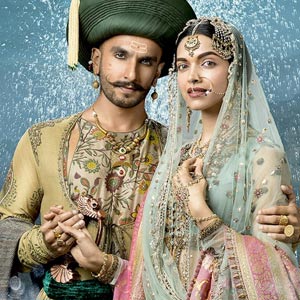