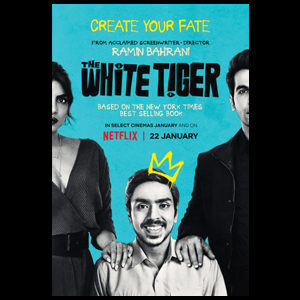 A review of The White Tiger must begin with the actor who is literally the ‘driving’ (pun intended) force of the film. Adarsh Gourav is electrifying as Balram Halwai, a lower caste boy from a large, poor family in rural India who dares to dream. His devious plan to escape the fate of the others of his ilk, to break free of the ‘rooster coop’ (as he calls it) is what The White Tiger is about.

An adaptation of Aravind Adiga’s 2008 Booker Prize-winning novel by the same name, The White Tiger has been reworked for the screen by Iranian-American writer-director Raman Bahrani, for the most part masterfully. The storytelling—peppered with pungent lines—is incisive, the pace frenetic, and the cinematography fantastic.

Performances from the supporting actors too are another highlight of the film. Kamlesh Gill as Balram’s awful, greedy grandmother is superb. So is Swaroop Sampat as the “Great Socialist.” Priyanka Chopra Jonas gives a nice, understated performance as the Indian-American Pinky who has empathy for her driver, Balram. Disappointingly, the usually consummate actor Rajkummar Rao seems at sea as Pinky’s husband, the U.S.-returned Ashok.

The White Tiger will make you squirm with its brutal depiction of class inequalities in India. But perhaps where one can fault the film is in presenting the protagonist’s story as the whole truth of a globalized India, the truth being that it merely skims the surface of a complex social problem. Also, there was really no need for that defecation scene. 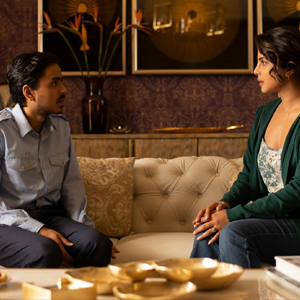