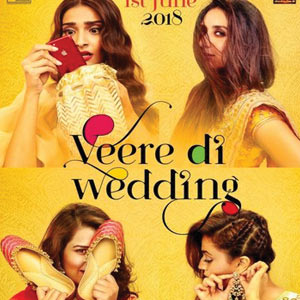 This all-girl ensemble comedy is a brave, if somewhat contrived, effort: We have rarely seen women on the Indian screen who are so uninhibited about their life, sexuality, and desires, and who smoke, drink, and swear at the drop of a hat! So whether you find this appealing or distasteful really depends on your individual taste in cinema.

Drawing inspiration from Sex and the City (the similarities are hard to ignore), Veere Di Wedding revolves around four school buddies who reunite after 10 years. So you have the commitment phobic Kalindi Puri (Kareena Kapoor Khan) who despite her misgivings, is going ahead with marrying her beau Rishabh (Sumeet Vyas), divorce lawyer Avni (Sonam Kapoor) who is trying to find her Mr. Right, the rebellious and foul-mouthed Sakshi (Swara Bhaskar) who is going through a divorce, and the disgruntled Meera (Shikha Talsania) playing an exasperated mother to a two-year-old.

The conversational chemistry between the besties makes up to some extent the lack of a solid plot. Some of the dialogue is genuinely funny but a little more detailing could have added gravitas to the story. Come to think of it, the film does not feature one conversation between the women that isn’t about men or marriage. It’s as if that is all there is to their life. Sonam is the only one of the four who has a career, and even she is desperate to get married!

Perky performances by the feisty quartet drive the film. Shikha Talsania is the dark horse here, almost stealing the show from the other three. While Kareena has the meatiest role, Swara gets to do the film’s boldest scene, and to deliver the funniest punch lines. There is an assortment of supporting actors, too, including a gay couple! 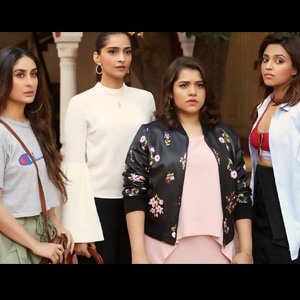