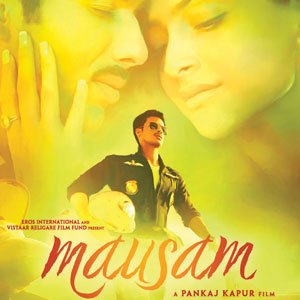 The ﬁrst half of Mausam should be quite a treat for those who like their cinema laidback and old fashioned, wherein romance is conveyed through stolen glances and unsaid words. In fact, this part of the movie is alluring and refreshing where Harinder Singh aka Harry (Shahid Kapur) and the displaced Kashmiri migrant, Aayat (Sonam Kapoor) fall in love with each other. The visual beauty of the pastoral scenes only enhances the overall effect. The turning point in the story comes with the demolition at Ayodhya and the turbulence that follows. The lovers are separated—while Aayat leaves for Mumbai, Harry joins the Air Force. It is at this point that the ﬁrst time director, accomplished actor Pankaj Kapur, seems to lose grip over his craft with the screenplay leaving a lot to be desired. The saga of the star-crossed lovers seems to go on and on, encompassing various political events, and spanning cities across the world, e.g. in Scotland and Switzerland. The climax, in Ahmedabad during the Gujarat carnage, borders on the ludicrous.

Both Shahid and Sonam deliver consummate performances, especially challenging because they have to sport varied looks in the movie. However, Sonam’s metamorphosis later as a style diva robs her of the charming innocence of the earlier reels. Aditi Sharma excels in a brief role. Music by Pritam is lilting and totally in sync with the ambience of the movie.

To sum up, Mausam, though an earnest effort by the director, doesn’t really live up to its pre-release hype. It does, however, have its moments.