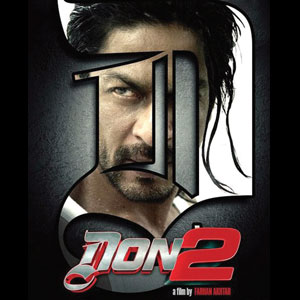 Don 2 marks Shah Rukh Khan’s return to anti-hero roles after a hiatus—remember Baazigar, Darr, Anjaam—and he executes it with great aplomb. His commendable performance, though, does not cover up the flaws in the movie, the primary one being a weak script and a slow, languid pace in the first half. Thankfully, the post-interval portions pick up in energy and keep you on the edge with some riveting action.

The glamorous and attractive gangster, Don (Shah Rukh Khan) this time plans to rob Germans of their Euro currency plates from a Berlin security vault. Is he able to accomplish his mission, especially with policewoman Roma (Priyanka Chopra) doggedly chasing him? Shah Rukh Khan is in great form—this is certainly his best action film to date. Priyanka Chopra as hot cop Roma performs her part with great gusto. Kunal Kapoor is good enough, Boman Irani as Don’s old foe, Vardhan, is fantastic, and Lara Dutta is glamorous though her role lacks meat. Hrithik Roshan appears in a cameo. The music by Shankar-Ehsaan-Loy is a big disappointment this time around. Jason West’s cinematography is terrific. Filmed in Germany, Switzerland, Malaysia, and Thailand, the film is visually alluring. The dialogues are masterly with some cool, zany lines. Action and stunts are spectacular. The movie is essentially a treat for Shah Rukh Khan fans. Those in the audience who are not, may find nothing special about the much hyped action thriller. TOP 10 SONGS