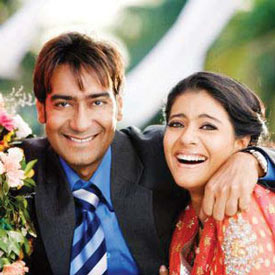 The sacred festival of Ganesh Chaturthi brought in a new Yug in the lives of Kajol and Ajay Devgan—quite literally! On September 13, the two became proud parents of a baby boy, their second child, whom they have decided to name Yug. The mom and dad were flooded with congratulatory messages from all their friends and well-wishers, among them Shah Rukh Khan, Bipasha Basu and Karan Johar.

Incidentally, Kajol is all set to share screen space with her mother Tanuja for the first time. The mother-daughter duo have been roped in by Kireet Khurana to act in his film Toonpur Ka Superhero. It’s all in the family here as Ajay plays the male lead. Tanuja plays Kajol’s mom in the movie.

Salman to be Katrina’s Bodyguard?

They may have parted ways on the personal front, but Salman Khan and Katrina Kaif remain mature enough to honor professional commitments made earlier. The two former lovers are said to be still open to starring in Sallu’s sister Alvira’s directorial debut titled Bodyguard, much to Alvira’s happiness and relief. In fact, the buzz is that Katrina has realised the true depths of her feelings for Salman post the break-up and is contemplating giving her relationship with the super brat another chance.

But it might be just too early to say that as rumors of Ranbir and Katrina being a ‘closet couple’ continue to gain momentum. What’s more, even Ranbir’s parents, Rishi and Neetu, are said to be very fond of Kat. The three of them are said to be bonding big time over family dinners.

After Konkona announced her marriage on Twitter, it’s now the turn of tennis ace Mahesh Bhupathi to announce his engagement with girlfriend Lara Dutta on the microblogging site that is becoming a hot favorite with celebrities. Lara confirmed the engagement saying that Mahesh popped the question to her over a candlelight dinner and slipped a ring on her finger in New York. Mahesh was there for the U.S. Open. Marriage will have to wait as “we’re both too busy this year,” says Lara, adding that their families are excited. “Life’s beautiful,” gushes the attractive actress.

Meanwhile, another ‘much in love’ couple enjoyed a cosy, romantic dinner at Johnny Depp’s Ritz Hotel in Paris on September 21. Yes, Kareena Kapoor turned 30 that day and this was Saif Ali Khan’s way of making the occasion memorable for his ladylove. You see, Bebo is a huge fan of Johnny Depp.

John Travolta bowled over by Ash

When fans spotted Hollywood icon John Travolta, accompanied by daughter Ella, at the Mumbai airport recently, rumors of the actor starring in a Bollywood movie went swirling around. Truth was that Travolta was there to launch the latest collection of an international watch brand and to receive the GQ Legend of the Year Award. At the awards event, Travolta mingled with the likes of Aamir Khan, Aishwarya and Abhishek Bachchan.

Interestingly, Travolta seemed to be bowled over by the gorgeous Aishwarya Rai Bachchan: he requested the organisers to seat him next to the young Bachchan couple. That’s not all. He also insisted that Ash present him the award, which she did. Travolta, on his part, presented the Cinematic Icon of the Year award to Aamir Khan.