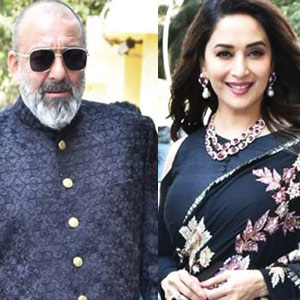 Fans can’t wait to see the hugely popular pair of the 90s—Sanjay Dutt and Madhuri Dixit—together on screen again after more than two decades. The man who has managed to pull off this coup for his spectacular period drama Kalank is none other than Karan Johar. Apparently, KJo had to cajole the hesitant Sanju baba into sharing screen space with Madhuri after so many years. Ms. Dixit is said to have severed her association with her rumored former beau after he was arrested in 1993.

By the way, Madhuri will release the first single of her English pop album by the end of the year. Yes, the bewitching actress also sings!