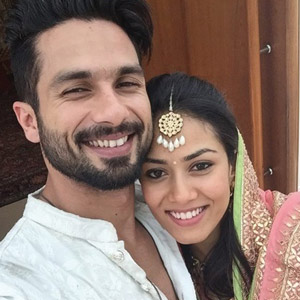 Bollywood’s most eligible bachelor is now a married man. Yes, Shahid Kapur and his pretty fiancée Mira Rajput tied the knot in an intimate ceremony at a farmhouse on the outskirts of Delhi at which only 40 people, including family and close friends, were present. Later, an after party was held at a hotel in Gurgaon which was attended by around 500 guests.

The celebrations then shifted to Mumbai where the newlyweds threw a grand reception on July 12 which was a star-studded affair. Among those spotted were Amitabh Bachchan, Ranveer Singh, Arjun Kapoor, Anil Kapoor along with daughter Sonam, Preity Zinta, Kangana Ranaut, Shraddha Kapoor, Alia Bhatt, and Diya Mirza, to name just a few.

By the way, grapevine had it that Shahid had graciously sent the first wedding invite to Saif Ali Khan and his begum Kareena Kapoor Khan!