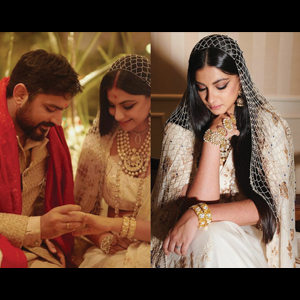 Anil Kapoor’s daughter and film producer Rhea Kapoor took everyone by surprise when she tied the knot with her longtime boyfriend Karan Boolani in a hush-hush, intimate ceremony at her father’s bungalow in Mumbai. Only family members and close friends, including Sonam Kapoor and her husband Anand Ahuja, were present on the joyous occasion.

The bride’s doting father later hosted a grand bash for the newlyweds which was indeed a star-studded affair. Rhea and Karan met during the filming of her debut production Aisha in 2009 where he was the assistant director.