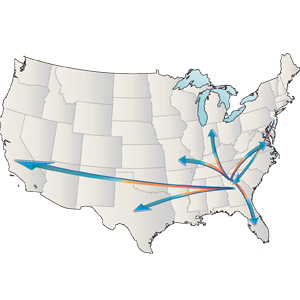 Most businesses know that they must register to do business and establish themselves as taxpayers and license holders in the state where their principal office is located. However, as businesses grow, managers and owners need to be mindful of additional states that may require registration based on sales and employees.

There are a few key areas where the jurisdiction of other states should be considered and that management should be aware of:
Qualification to do Business: After registering with a home state, most likely the state where the main office is located, a company must be aware of the regulations that require enterprises to qualify to do business in other states. Most states will require registration for one or more of the following activities:
• Having a physical presence in the state such as a branch office;
• Having multiple employees located in the state;
• Storing tangible assets such as inventory in the state; or
• Making a significant percentage of sales within the state.

Failing to file a qualification application can be easily fixed; the requirements are very similar to filing an incorporation in the state and can usually be accomplished in a short period of time. The company must name a registered agent in the state and will need to make sure that its company name is available in each state where it must qualify.

Payment of Sales Taxes and Income Taxes: Unlike qualifying to do business, a failure to pay state sales taxes or income taxes can result in major penalties being imposed by a state where significant business is being conducted. Each state has its own criteria for determining whether taxes must be paid, but generally if revenue is being generated in a state then there is a possibility that taxes may need to be paid there. Every state also has its own exemptions, such as the rule that a company with only occasional sales in a state may not be required to file taxes there. Similarly if the only company presence is online and all sales are conducted through the company’s website, then most states will exempt the revenues, although many states are reconsidering this policy. Additionally, an exemption may not be a blessing, since some states will tax any income that is not being taxed by other states, also known as the “throwback rule.” Most accountants will be familiar with the complex state framework on taxes but ultimately it is the company’s responsibility to pay taxes in all the jurisdictions where they may be due.

Non-Compete Agreements: There is a great deal of difference among states in the enforceability of non-compete agreements entered into with key employees and managers. Some states, such as California, make it nearly impossible to enforce a non-compete, while other states such as Georgia will honor non-competes that are narrowly tailored. Generally the law of the state in which the employee is located will govern a non-compete agreement.

Wage and Hour Rules; Exempt Employees; Overtime Etc.: A whole array of laws that govern wages, vacation time, overtime, and other payroll issues for employees are also governed by the state in which the employee is located. Although many states use the Federal Fair Labor Standards Act (“FLSA”) as a default, states can have rules that are more protective of employees than the federal standard. For example, several states provide that vacation pay is earned as it is accrued and must be paid out to an employee at the time of termination or at the end of each year. Consequently, if a company wants to have uniform rules, they may need to default to the state that has the strictest standards, or in the alternative, institute varying policies depending on the state law that governs each employee.

The main areas to watch out for in the wage and hour arena are listed below:
• Overtime pay and which employees are eligible or exempt from it;
• Vacation pay and “use it or lose it” policies;
• Maternity and paternity policies;
• Minimum wage rates; and
• Lunch and meal breaks or periods that are required by some states.

State laws can become an expensive trap if companies are not aware of the jurisdictions that may have a say over how their business is conducted and especially if taxes have not been paid. Even businesses that consider themselves to be small should evaluate their operations to determine if they are considered to be doing business outside of their home state.

Business Insights is hosted by the Law Firm of Kumar, Prabhu, Patel & Banerjee, LLC. Disclaimer: This article is for general information purposes only, and does not constitute legal, tax, or other professional advice.