Home > Magazine > Business Insights > How to Use Noncompete Agreements

How to Use Noncompete Agreements 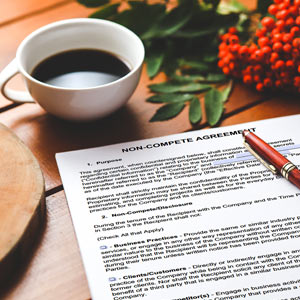 Duration and Geography are two of the many considerations that are important to such contracts.

Noncompetition agreements, also known as covenants not to compete, are agreements between parties not to enter into competing businesses or activities either during a business relationship or after a relationship has terminated. While these contracts arise most often in an employment context, they can also be useful tools to protect your interests as a partner/ shareholder of a company or when acquiring an operating business. Noncompetition agreements are generally used as deterrents when a party wishes to prevent a departing employee, owner, or partner from using information or resources to compete in the same market. However, these agreements are not enforceable in every jurisdiction and can be rejected for having overly broad restrictions.

Protecting the Employees
In many states, such as California, noncompetition agreements are not valid in the employment context since they are deemed to be against public policy and a restraint on free trade. The concept is that an employee has a right to work in his chosen industry and should not be prevented from earning a living. Similarly, some countries also reject noncompetes outright. However, the laws of most states and countries have established certain criteria that must be met for the noncompete agreements to be recognized, such as limiting the time periods and territories in which the restrictions apply.
• Geographical Restrictions
Many states will look to the reasonableness of the geographical restriction. However, it is important to note that the geographical restriction can change depending on the industry or profession. For example, technology companies may have a much greater territory than a retail operation.
• Duration Restrictions
A noncompete that lasts one or two years is customary, however longer terms are often seen in buysell agreements or in acquisitions.
• Consideration
Noncompetition agreements need to be supported by something of value given to the party agreeing to refrain from competing with the employer or partner. Some jurisdictions consider the employment itself to be enough support for a noncompete, but a restrictive covenant signed after an employee has already started work may require a pay raise or bonus to support the consideration. Often an employer will use an added incentive such as an equity incentive plan as a basis for asking for a noncompete.

“Blue Pencil” Jurisdictions
Even if some of the criteria above have not been met, some jurisdictions allow judges or arbitrators to modify the agreements after the fact to make them compliant.

Nondisclosure, Nonsolicitation and Confidentiality
Agreements that protect a company’s information and contacts are much more likely to be recognized and should be used more broadly. The concerns set out above with respect to noncompete agreements are generally not applicable to confidentiality and nondisclosure agreements. Additionally, agreements that prevent departing employees or partners from hiring or diverting a company’s employees or customers can be just as effective in protecting a company’s future interests and are not scrutinized in the same manner as noncompetes.

Pro Tips
• Do use noncompete agreements sparingly and only for critical employees such as salespeople, business development personnel, and key executives.
• Don’t underestimate the use of confidentiality, nondisclosure, and nonsolicitation agreements; they don’t attract the same level of scrutiny and may be just as effective in preventing competition.
• Do bind partners and shareholders in addition to employees; a departing owner can be much more harmful as a competitor than an employee.
• Don’t impose broad restrictions, but craft noncompetes narrowly to prevent real harm to the existing business.
• Do review agreements frequently to ensure they are still enforceable and compliant.

Business Insights is hosted by the Law Firm of KPPB Law (www.kppblaw.com).
Sonjui L. Kumar is a founding partner of KPPB Law, practicing in the area of corporate law and governance. Jesse C. Moore is a law clerk at KPPB Law.
Disclaimer: This article is for general information purposes only, and does not constitute legal, tax, or other professional advice.