Smartphones: The New Frontier in Marketing 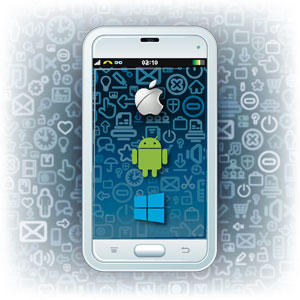 Mass Media has been a common form of marketing for decades, starting with newspapers, magazines, and radio, escalating to television, and finally the internet. The next frontier for mass advertising is clearly the smartphone. As the number of people who own a smartphone (mainly iPhones, Androids, and Samsungs) grows, so does the potential for accessing those consumers through their mobile devices. Similar to the internet, the lower cost and easy access to these applications makes it a viable marketing option for both large and small businesses, leveling the playing field in many industries.

One approach for companies is to simply use the same internet marketing strategies that they are using to reach customers on their laptops and transfer them to users browsing the internet on their hand-held devices. So businesses that are already reaching customers using social networking mediums such as Facebook can use the same mediums to market to consumers on their smartphones. Almost every application, including Skype, LinkedIn, and Twitter can be downloaded and accessed on phones so that users can receive notifications and messages when they are accessing the internet on their devices.

However, smartphone marketing goes well beyond just internet marketing on cell phones. Services like Google AdMob use apps to market directly to consumers. Using this service, marketers can place their advertisements on popular apps in addition to internet search engines and social media sites. Other marketing services such as Shopkick operate as apps on smartphones to give reward points to consumers when they enter specific stores or purchase certain products. The consumer can redeem those reward points with participating stores in return for discounts or special prizes.

The greatest advancement in smartphone marketing, though, has been the introduction of QR (Quick Response) codes. QR codes and their successors, Microsoft Tag codes, Near Field Communications (NFCs), are squares consisting of black dots on a white background. Consumers can use the camera on their smartphones to scan QR codes, which then relay the contained information to the consumer in the form of a webpage. Savvy companies are now including QR codes in all their traditional forms of advertising including print, television and internet ads, reaching the mobile consumer on their smartphone. One of the biggest advantages of using QR codes is the ability to target the content that is being provided to customers. QR codes can relay anything from a simple phone number or a link to a website to videos and customer-specific offers. This flexibility ows marketers to customize their marketing pitch based on demographics, customer preferences, and location. For example, if a business knows that readers of a certain magazine are regular customers and respond well to special offers, it can tailor its QR codes in the magazine to convey loyalty points and special offers to the reader. Similarly, a customer attending a concert or a festival can receive a promotion specifically targeted to products or services being sold at that event.

QR codes provide an additional dynamic to traditional print and electronic marketing without adding much to the advertising budget. Services like Microsoft Tags allow advertisers to make their own tags for free. They also provide free reports on how many times your tag has been scanned and at which locations.

The relatively low cost of using QR codes is only one of the many advantages of marketing on smartphones. Smartphone marketing gives businesses the ability to target particular demographics based on location and the kind of smartphone used. It also allows marketers to tap into a growing market of young, technology-savvy consumers, who are increasingly basing their consumption patterns on smartphone usage. Smartphone marketing provides marketers a more vibrant platform with attractive ad formats for reaching consumers.

There are certainly downsides of smartphone marketing as well. Primarily, this marketing strategy will usually be an additional cost for most companies, since businesses will not be ready to replace their existing forms of advertising yet. Additionally, the technology used to reach consumers with web-based and app-based advertisements is still in a fledgling state. Advertisers understand that unlike television and computer screens, smartphones have exponentially fewer pixels and advertisements that would otherwise stand out on larger screens might not work as well on a smaller screen. Finally, the return on investment of smartphone marketing is yet to be tested on a large and long-term scale. Consequently, many advertisers are still skeptical about recouping the money and efforts they will need to spend on smartphone marketing; however like the internet, this tide will just continue to grow and smart businesses should sign on sooner rather than waiting to catch up.

[Business Insights is hosted by the Law Firm of Kumar, Prabhu, Patel & Banerjee, LLC. Sonjui L. Kumar is a corporate, transactional attorney and a founding partner of KPPB Law. She primarily focuses on serving as general counsel to privately held companies assisting them with all legal matters, including corporate governance, contracts, shareholder matters, mergers, and acquisitions.

Disclaimer: This article is for general information purposes only, and does not constitute legal, tax, or other professional advice.]