COVID-19  In-depth info for Indians in Atlanta/Georgia. Click here
Home > Magazine > Business Insights > What exactly is Social Media and how can I benefit by using it?

What exactly is Social Media and how can I benefit by using it?

By: Jamie Turner and Reshma Shah 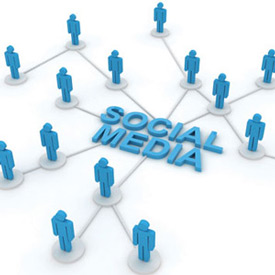 The easiest way to wrap your mind around social media is to draw comparisons to other things you may be familiar with. Let’s start with social media in general. What is social media? You’ll find dozens of answers on the internet, some helpful and some flat wrong. But for our purposes, social media are internet channels that allow a two-way conversation to happen between your prospects/customers and your business. The problem most businesses have with social media is that they use them for one-way monologues instead of two-way dialogues. Which brings us to our first analogy: Social media is like a telephone, not a megaphone. And telephones are meant for dialogues, not monologues.

Facebook is like a pub. It’s a casual place where you can go to talk about what you did over the weekend, tell a joke or tell people about the checkers convention you attended last week. (Side note: If you actually did attend a checkers convention, we’d suggest you replace the phrase “checkers convention” with “mountain climbing convention” before announcing it to your Facebook friends.)

LinkedIn is like a trade show. You wouldn’t tell people what you did in Vegas last weekend at a trade show, would you? Okay, maybe you would, but the average businessperson wouldn’t. Keep LinkedIn to your professional side. Talk about business. Talk about interesting articles in Harvard Business Review. And use plenty of phrases like “value chain” and “business model” in your profile. That should do the trick.

Twitter is like a cocktail party. Just be sure you send out Tweets that are helpful. The big mistake new Tweeple make is that they take Twitter seriously when its home page asks, “What are you doing now?” Well, we’ve got some bad news for you. Nobody cares what you’re doing now. What they care about is information that will help them in their daily lives. So stick with helpful Tweets that will either position you (or your company) as an expert, will drive people to a landing page on your site or will promote someone else in your industry who will someday return the favor.

YouTube is like Times Square on New Year’s Eve. Times Square on New Year’s Eve is packed with people clamoring for attention. And there’s the problem. Just as it’s hard to stand out in Times Square, it’s also hard to stand out on YouTube. There’s just too much competition. So if you’re going to use YouTube to make money, you’ll have to build awareness for your YouTube channel first. (You do have a YouTube channel, right? No? Then get hopping and go set one up right now.)

Beyond Facebook and Twitter
One of the more common mistakes people make when thinking about social media is that they think social media is only about Facebook, LinkedIn, Twitter, YouTube and MySpace. In reality, social media is about much, much more. Here are just some of the other tools you’ll want to be familiar with when it comes to social media: blogs, bookmarks and tags, email newsletters, widgets, content aggregation sites, wikis, voting, Crowdsourcing, discussion boards and forums, backchannel sites, tweetups, photo sharing sites, podcasting, presentation sharing sites, virtual words, ratings and reviews, to name the most popular tools.

Whether you work as a sole proprietor or at a Fortune 500 company, it’s good to know how others are using social media so you can incorporate those models into your own campaign. We have identified five different ways companies use social media to grow their sales and revenue.

eCommerce. If you can sell your product or service online, then you’ll want to drive people to a landing page on your website where they can buy your goods. How can you accomplish this? Just do what Dell does—they Tweet about special promotions available only to the people who follow them on Twitter. The promotional links are easily tracked so they can see how many people went to the landing page and how many converted from a prospect to a customer. They generate millions of dollars in revenue each quarter by using this method.

Research. Many companies are using social media as a tool to do research. Sometimes, this involves building a website to track the results. Starbucks has done this famously with their MyStarbucksIdea.com website. Other times, using social media as a research tool can be as simple as doing a poll on LinkedIn, SurveyMonkey, or via email.

Customer Retention. A good rule of thumb is that it costs three to ﬁve times as much to acquire a new customer as it does to keep an existing one. Given that, wouldn’t it be smart to use social media as a tool to keep customers loyal and engaged? That’s what Comcast and Southwest Airlines do—they communicate via Twitter, Facebook, and other social media platforms to help solve customer service issues.

Lead Generation. What do you do if you can’t sell your product or service online? Then you’ll want to do what many B2B companies do—that is, to use social media to drive prospects to a website where they can download a whitepaper, listen to a Podcast, or watch a video. Once you’ve captured the prospect’s contact information, you can re-market to them via email, direct mail, or any number of other methods.

What does all this mean? The bottom line is that the world is changing at a rapid pace and it’s only going to change faster in the future. You have a choice – wrap your mind around social media and use it to make money, or get left in the dust when your competition beats you to it. Which side are you going to be on?

[Excerpted from the Book “How to Make Money with Social Media” by Jamie Turner and Reshma Shah, PhD. Business Insights is hosted by the Law Firm of Kumar Pathak, LLC]