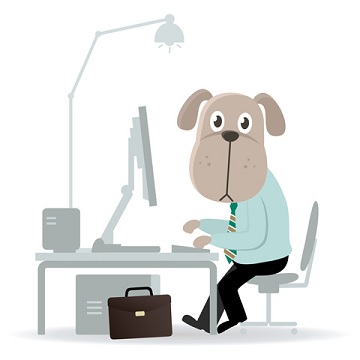 Look Who’s the Top Dog at Your Workplace!

Back in 1993, Gloria Steinem and the Ms. Foundation for Women founded “Take Our Daughters to Work Day,” realizing that the self-esteem of a girl could be enhanced greatly if she spent a day at a workplace and saw Mom or Dad being ordered around for a change.

A decade later, this special day evolved into “Take Our Daughters and Sons to Work Day,” as people realized that it was unfair to leave boys out, especially since surveys showed that almost all boys, regardless of age, were eager to take advantage of this rare opportunity to skip school for a day.

But even before boys were included, people realized that “Take Our Daughters to Work Day” was unfair to another significant group, one that hardly ever got a chance to visit workplaces. And so, sometime in 1996, people in the West began to observe “Take Your Dog to Work Day.”

It started in the U.K., then moved to the U.S., where it became an instant hit. People loved the idea of driving “Rover” and “Buddy” to work, especially since it was the first time many Americans had ever been able to use those special car pool lanes.

“Take Your Dog to Work Day” eventually spread to Canada, New Zealand and even Australia, where it became almost as popular as “Take Your Kangaroo to Work Day.”

Various versions of “Take Your Daughter/Dog to Work Day” have since cropped up around the world:

Jamaica: “Take Yourself to Work Day.”

But none of these special days has been quite as popular as “Take Your Dog to Work Day,” which was observed this year on June 25. It was created for three main reasons: (1) to celebrate the companionship of dogs; (2) to encourage people to adopt dogs from humane societies, rescue groups and shelters; and (3) to show employees how easy it is to take naps under their desks.

Taking a dog to a workplace can be risky, of course. What happens, for example, if you bring your dog to your workplace and he decides that he doesn’t want to just sit around, preferring to be active? Next thing you know, your boss comes over to tell you that you are getting fired and your dog is getting hired. “I like him,” your boss says. “He seems to be a self-starter. Already has his paws in everything.”

If you think that’s far-fetched, then you probably haven’t heard of the goat herder in Tamil Nadu, India, who made the mistake of taking his dog to work. “Now dog has job, I stuck at home,” the man said. “It’s good for dog, but I get bored. Not many cats around to chase.”

Taking a dog to work was also the undoing of a London man. “I miss my job,” he said. “I enjoyed providing customer service for BP.”

If you call British Petroleum’s customer service department with a complaint of any sort, don’t be surprised if you hear a growl on the other end. Or a recording that says: “Sorry, all our dogs are currently busy, trying to fix an oil spill. Please stay on the line. Your call is being transferred to a hyena.”

Most dogs are unemployed, of course, but we shouldn’t forget that tens of thousands of them do have important jobs, such as leading the blind, sniffing out drugs and bombs, following the trail of criminals, and fetching beer from refrigerators.

Yes, if given the chance, dogs can be very productive. Just ask the man in London. He recently spent an entire day with his dog at work, thanks to “Take Your Human to Work Day.”