BIRYANI AND THE BRIDE 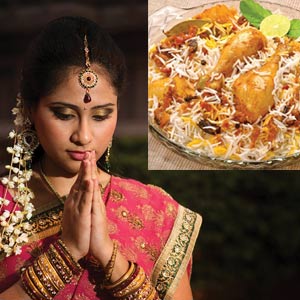 Biryani is an important part of many Indian weddings, one that might make or break a marriage. If you don’t believe that, just ask the bride in Bangalore who recently broke off her nuptials with a groom who works in Dubai.

According to newspaper reports, the groom had flown in for the Muslim wedding, which had been planned for weeks (three weeks, to be precise). The bride and groom had not met before and had apparently not spent enough time discussing an important issue: what type of biryani would be served to guests.

The bride’s family prepared chicken biryani, but the groom’s family wanted mutton biryani. A quarrel erupted between the parties, one that isn’t hard to imagine:

Groom’s mother: “We do eat chicken biryani, but this is a special occasion.”

Bride’s mother: “Yes, you are right: it is a special occasion. That is why we bought special chickens. The best chickens in the world. These chickens have been raised on a special diet.”

Groom’s mother: “What kind of diet?”

Bride’s mother: “Biryani. They were fed biryani every day.”

Groom’s mother: “What kind of biryani?”

Groom’s mother: “You are lying to me. What kind of chicken is going to eat mutton biryani?”

The argument must have been quite heated, for it prompted the bride to reconsider her decision to marry the groom. She and her family had already been having doubts about the groom’s character.

“Finally, the biryani episode settled it and I knew I would not have been happy in the relationship,” the bride told The Times of India.

Instead of celebrating her marriage, her parents accompanied her to a police station, where she asked officers to save her from the marriage.

She has pledged to be more careful in the future. Next time she speaks to a potential groom, her first question will be an important one: “Chicken or mutton biryani?”