BREXIT— AND OTHER GREAT WORDS WE NEED 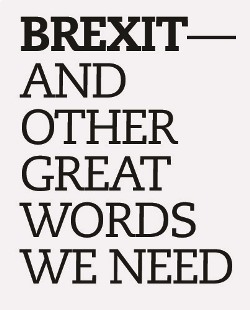 British voters recently decided to leave the European Union, a move that has been called Brexit, a combination of the words Britain and exit.

Brexit is a great word. Why did it take us so long to come up with it? When India gained its independence from Britain, we should have called that Brexit. Every Commonwealth country but one experienced a Brexit. They were thrilled to finally achieve a Brexit.

In some cases, of course, it wasn’t just a Brexit. It was a Brexpulsion. The British were booted out. They had Brantagonized the natives and they had no Brexcuse.

Yes, Brexit is a word that inspires many other words. Here are just a few:

Brelope: When an Indian woman runs off with a British man.

Brinjure: What the Indian woman’s father threatens to do.

Brintelligent: How the British man describes himself.

Bridiot: How the Indian woman’s mother describes him.

Brannulment: What the judge tries to do.

These words are unlikely to catch on, but Brexit certainly has. In fact, you may soon find it in the dictionary, along with a broad definition: “Any type of exit by the British government, British people, or even a British sports team. For example, millions of cricket fans in India cheered the Brexit from the World Cup.”