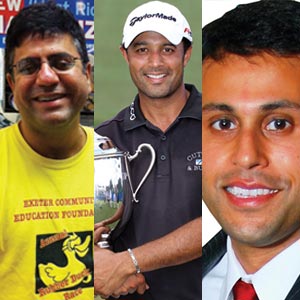 He may own two Dairy Queen restaurants, but Hamid Chaudhry is best known for his fundraising, not his ice cream. That’s how the Pakistani native has endeared himself to residents of Reading, Pa. Chaudhry was recently featured in The New York Times for his tireless support of various community organizations through donations and fundraising activities.

“He has donated items to all of the schools in our district as well as our baseball, basketball, football, golf, lacrosse, water polo (and) volleyball teams,” Susan Walmer, co-president of the Brecknock PTO, told the Reading Eagle. “He has hosted blood drives, put up reward money to help ﬁnd criminals and sponsored car shows. He has family nights on Fridays with balloons and face painting. He hosts fundraising activities for our schools with dunk tanks and DJs that he pays for.”

Why does he do it?

“My customers have made me well-to-do,” Chaudhry told The Times. “They patronize me, so why wouldn’t I give back?”

Chaudhry, 40, who came to America in 1988 and earned a ﬁnance degree from the University of Illinois, tries to have a positive inﬂuence on his young employees. “I have to be a dad. I have to be a salesman. I have to be a shrink,” he told the Eagle. “I tell them to give up their social life; that will come back to them later. ... I tell them to get a college degree, that it doesn’t matter where you end up in life. Get your degree and then do whatever you want to do in life.”

Arjun Atwal made history last August when he captured the Wyndham Championship, becoming the ﬁrst Indian to win a PGA Tour event and taking home almost a million dollars. It was a big victory for Atwal and a major milestone in Indian sports, but Atwal couldn’t exactly brag about it to his playing partner, who has won 71 PGA Tour events and 14 major championships.

The Kolkata-born Atwal, 38, who started playing golf at age 14, has been Tiger Woods’ neighbor in Orlando, Fla., and playing partner for six years, a relationship he credits with improving his game. “He has been a close friend and has been supportive during tough times,” Atwal told DNA. “That’s when you know he is a true friend. I don’t care whether he is Tiger Woods or whoever. He is just a very good friend. Professionally, I can’t think of anyone else whom I can ask for help. He is truly inspirational.”

At the PGA Championship in August, Atwal scored 151 after two rounds, missing the cut. Woods missed the cut too, but did manage to beat his playing partner by one stroke. Even when Tiger stumbles, he’s hard to keep up with.

Manish Mehta has 21,000 followers on Twitter (@TheJetsStream), but if you aren’t a sports fan, you probably haven’t heard of him. Mehta is a beat writer for the New York Daily News and his beat happens to be one that New Yorkers are passionate about, namely the New York Jets.

Mehta, whose Daily News blog is called The Jets Stream, has been covering the Jets for about six years, moving from the Newark Star-Ledger to the Daily News last year. The Philadelphia native grew up rooting for his hometown Eagles, but says he doesn’t root for a particular team anymore.

In an interview with the blog Jersey Jets Fan, Mehta gave this advice to aspiring sports writers: “Work hard. Be diligent. Most of all, be fair. Every debate, every argument, every discussion has two sides. Don’t be quick to rush to a conclusion. Be thorough and efﬁcient.”