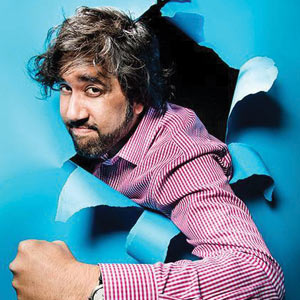 Like many Indian-American youths, Vivek Tiwary faced the pressure to become a doctor, engineer, or lawyer.

“But I have to give my parents credit—they loved the arts,” Tiwary told The Washington Post’s Comic Riffs. “They introduced me to the arts, taking me to everything from ballet to Broadway.”

The New York-based Tiwary has certainly flourished in the arts. His Broadway productions, including A Raisin in the Sun (2004) and American Idiot (2010), have received 44 Tony nominations and won 25 Tony Awards.

Tiwary, 43, is also the creator of a best-selling graphic novel The Fifth Beatle, which is being adapted into a mini-series.

The University of Pennsylvania graduate has loved comics since he was a child and recalls fondly how his late mother would read Tintin and other comics to him.

“It’s true that my traditional Indian parents would have preferred me to choose a more stable and lucrative career than what I do,” Tiwary said. But he added that his parents were supportive of his career, even if they were nervous.

His two children, aged 8 and 5, are learning to appreciate comics themselves. “As a dad who loves this stuff,” Tiwary said, “it’s a wonderful feeling.”