CONTROVERSY AT THE INDIAN SCIENCE CONGRESS 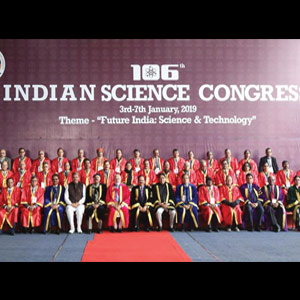 Two speakers created a wave of controversy at the 106th Indian Science Congress, held recently on the campus of Lovely Professional University in Jalandhar. One of them discredited the findings of Albert Einstein and Isaac Newton, while another made such preposterous claims that even Donald Trump would have raised his eyebrows.

The second speaker, Professor Nageswara Rao of Andhra University, made a presentation to a special Children’s Science Congress, where he told an audience of teenagers that it was clear, from stories in the Ramayana and Mahabharata, that airplanes and guided missiles existed in ancient India. Not only that, but the people of those times were producing test tube babies and using stem cell research.

Budding scientists are no doubt eager to scoop up tickets for the 107th Indian Science Congress in 2020, wondering what other great discoveries they might learn about. They might find out, for example, that the people of ancient India were ordering pizza on their cell phones, heating up food in microwaves, and finding their mates on the Internet (known then as IndiaNet).

Unfortunately, next year’s attendees probably won’t learn more details about the amazing discoveries of ancient India because the Indian Science Congress is planning to put an end to such freewheeling presentations of science.

“From next year we have decided that all the people, even top scientists, who want to interact with anybody at the Science Congress, would be asked to submit their abstracts, not to deviate from their abstracts, and we will place one of our members there as a moderator,” Premendu P. Mathur, a general secretary at ISC, told Reuters news agency.