DINNER WITH A GOLDFISH GETS BAD REVIEWS 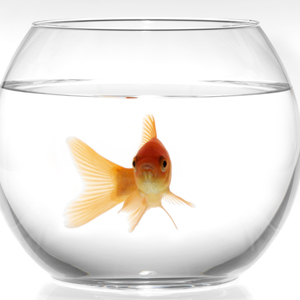 Prakash Mallya, a managing director at Intel India, recently tweeted a photo of his dinner companion at Trident Bandra Kurla in Mumbai: a goldfish.

Because Mallya had visited the hotel’s restaurant alone, the staff placed a goldfish bowl on his table to keep him company. “So nice & thoughtful and something that’s never happened in all my travel thus far,” Mallya wrote.

Mallya’s tweet generated more than 13,000 likes and a number of positive comments, such as this one from a Twitter user named Vidi Chandra: “Preferable to a human. No eating noises or boring stories. I want one.”

But Mallya was also flooded with responses expressing concern for the goldfish. Did anybody ask the goldfish if it wanted to spend time with Mallya?

Actually, the respondents were more concerned about the welfare of the goldfish than its social life.

“That bowl is way too small for that fish,” wrote Adam Hampton, a British writer. “Perhaps, instead of exploiting the fish to pander to human beings, the hotel should provide decent living conditions to the animals in its care. This is unethical and, quite frankly, nothing like ‘nice’ or ‘thoughtful.’”

Added a Twitter user named Pranab Bose: “So nice and thoughtful to keep someone captive while you enjoy and pass time watching.”

Perhaps the hotel will soon invest in a robotic goldfish that runs on batteries and doesn’t cause concern to animal activists.