EXCLUSIVE INTERVIEW WITH A DOMESTIC CAT 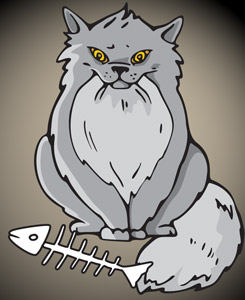 A new study, conducted by researchers from the Smithsonian Conservation Biology Institute and the U.S. Fish and Wildlife Service, has found that outdoor cats kill as many as 3.7 billion birds and 20.7 billion small mammals in the United States every year. Yes, billions of birds, squirrels, chipmunks, rabbits, and other cute animals are being killed by these whiskered terrorists among us and the Obama administration is doing nothing about it. Congress has not proposed any laws to deal with the cat terrorism crisis (CTC), but is considering dozens of measures to deal with illegal immigrants from Mexico and other countries, most of whom, it should be pointed out, have not eaten a single squirrel in their lives.

The NRA, meanwhile, is insisting that the government should arm all rabbits, but what else would you expect from the National Rabbit Association? They want to protect their own kind. But the NRA has plenty of opposition from CPR (Chipmunks for Peaceful Resolutions) and DOA (Ducks Opposed to Aggression).

What’s truly scary about CTC is that it’s not just wild cats that are going on killing sprees, it’s also domestic cats—those sharp-toothed monsters that many people keep as pets, only to be shocked one day to find animal remains in their backyards, while the cat purrs innocently from under the bed with an expression on its face that says, “The dog did it!”

To help everyone get a better understanding of CTC, I contacted Dr. Juan Morales of North Georgia University, who arranged for me to conduct an interview with a domestic tabby named Monty. I used an incredible but still widely unrecognized animal communication device developed by Morales with a generous grant from the Feline Association of North Georgia (FANG).

Monty: “Killed Mrs. Anderson’s parakeet. Isn’t that what you’re interrogating me for?”

Me: “Well, not exactly. I want to know about all the little animals that are being killed: birds, squirrels, chipmunks, rabbits, mice, and so on. Billions of them.”

Monty: “You can’t blame it all on cats. Did you know that rabbits don’t look both ways when they cross a road? Squirrels are suicidal— they walk on electric cables. And birds are morons—they fly into glass windows.”

Me: “Are you saying that you haven’t done much killing?”

Monty: “I have, but it’s my owner’s fault. She lets me out of the house every evening. There’s not much to do outside, so I catch and eat five small animals, purely out of boredom. When I slink back home, my owner looks at me and says, ‘Oh, you poor thing. You must be so hungry. Here, let me give you some cat chow.’ I’m already quite full, so I eat only a few morsels. And my owner says, ‘Oh, Monty, you’re such a finicky cat. Here, let me open a can of Fancy Feast for you. I hope you don’t mind salmon and shrimp.’ So I have a feast and go to bed. And the next day, when she takes me to the vet, they wonder how I’ve gained 20 pounds.”

Me: “Don’t you ever feel sorry for the squirrels or mice you kill?”

Monty: “Occasionally, I do. Just as you humans sometimes have buyer’s remorse, I sometimes have eater’s remorse. I’ll start eating an animal, feel sorry for it, and just leave it there in the backyard, usually next to the doghouse.”

Monty: “Oh, no. He’s a softie. He used to bark at me, but the owner took him for anger management classes. Nowadays, when I go near him, he tries to shake paws with me.”

Monty: “Oh, no. Cats are not supposed to get too chummy with dogs. It’s against the ARS (animal rules of survival). I keep a copy of it in my brain.”

Me: “Doesn’t your owner ever take you for any classes, so you’ll learn to get along with other animals?”

Monty: “Ha ha, that’s funny. First of all, she has no clue. She thinks I’m the reincarnation of Gandhi. Second of all, I’m a carnivore. Have you watched those wildlife documentaries that show lions, cheetahs, and other big cats attacking deer in the Serengeti? Well, the backyard is my Serengeti. And if you’re not holding a video camera, you’d better keep an eye on your ARS.”