Fun Time: CRAWLING DOWN THE PATH TO ELECTRIC VEHICLES 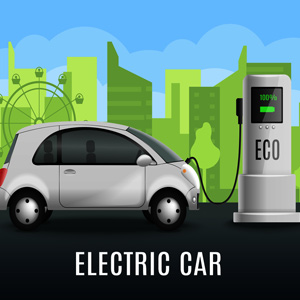 When it comes to adopting new technology, I’m not what you’d call a “trendsetter.” I’m more like a “trend wetter.” I splash water on the trend, try to make it go away. Unlike some people, I don’t stand in line for hours to buy the latest gadget at an exorbitant price. I wait for everyone around me to buy the gadget, then try to get one of them to sell it to me at the used gadget price.

But before I buy the new gadget (which isn’t really new anymore by the time I buy it), I make sure that the previous gadget (the one being replaced) has either stopped working completely or has become an annoyance. The latter was the case with my family’s old TV, which we recently replaced with a slightly bigger and immensely smarter TV. (It’s so smart that it refuses to display Fox News.)

Both TVs were made by Samsung, but the previous one was almost 10 years old and would periodically turn off and on, usually at the most inopportune moments, such as during the last two minutes of the Super Bowl. One moment, Tom Brady is dropping back to throw the football, the next moment people in Philadelphia are climbing light poles and all my guests are screaming at me.

When I finally bought a new TV, it was so much better than the old one that I found myself asking, “Why didn’t I do this sooner?”

That’s a question I will undoubtedly ask when I finally buy an electric vehicle, probably a decade or two from now. The entire world, not just me, has been far too slow in replacing gasoline-powered vehicles with far more efficient and environmentally friendly electric vehicles.

In America, where Tesla and other automakers are planning to introduce dozens of electric and hybrid cars in 2019, sales of such vehicles accounted for only 2 percent of total car purchases in 2018. That’s largely because electric cars cost more than gas-powered cars and charging stations are few and far between. If you run out of power between two stations, you can’t get a friend to bring you a canister of electricity. And if you’re looking for a boost in Montana or Wyoming, you are more likely to get it from a charging bull than a charging station.

While it takes only a few minutes to fill up at a gas (petrol) station, it can take as long as 40 minutes to get an 80 percent charge with one of Tesla’s Superchargers, according to a New York Times article. It’s possible to charge your electric car overnight at home, but if you have a long drive to work, you may need to find another outlet, both for your car and your frustration.

In India, electric cars are a long way from becoming common, but electric two-wheelers are rapidly catching on. According to the Society of Manufacturers of Electric Vehicles (SMEV), only 1,200 electric cars were sold in the entire country in fiscal 2017-18, dropping from 2,000 the previous year. The average Indian is more likely to invest in skiing equipment than an electric car.

Of course, 2030 is more than a decade away. But at least we’ll see lots of electric vehicles on the highway. And perhaps by 2040 or so, I’ll be ready to buy one myself.

With my luck, electric cars will be considered old technology by then. Newer cars will be running on something else, perhaps low-fat milk.

The most popular car, of course, will be the Chevrolet Cruze LT (lactose tolerant).