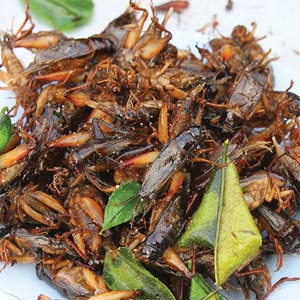 Probably not, but don’t be surprised if cricket consumption increases considerably over the next few decades.

I’m referring, of course, to the insects known as crickets, those noisy bugs that have become a cheap source of protein for many people around the world. If you go to a specialty store, you may be able to buy a bag of dried crickets and add them as a protein boost to your regular food, just as you might add raisins or nuts. You may also be able to buy cricket flour or ground crickets (not to be confused with cricket grounds).

If the idea of eating insects turns you off, you’re not alone. I’ve never knowingly eaten an insect and am not eager to taste them. But if we’re completely honest with ourselves, we’ll realize that we’ve already consumed insects or insect parts. That’s because insects are virtually everywhere and it doesn’t take much for them to enter our food supply. When you buy any type of flour, there’s a good chance that a few insects have been ground into the flour. Please don’t complain to the manufacturers; otherwise they may start charging us for the extra protein.

There is also a good chance that you have fallen asleep with your mouth open and forgotten to put a “Keep Out” sign in front of it. Not that it would have helped. Insects are notorious for ignoring signs.

I’m not trying to nauseate you. I’m just trying to make the point that insect-eating is quite natural. Many of us do it without realizing we’re doing it. Others do it quite deliberately. About one-quarter of the world’s population, including people in Africa, Asia, and Latin America, regularly eat insects.

Crickets are a popular choice among many people because they’re easy to grow and contain about 65 to 70 percent protein. Not only that, but they apparently also have 2.2 times more iron than spinach. If your kids don’t want to eat spinach, ask them if they’d like to eat crickets instead.

Crickets are also tasty. That’s what some people claim anyway. According to one online article, crickets taste like popcorn. I can’t wait to see the look on my kids’ faces when I take them to the movies and give them a bag of crickets.

If you don’t want to eat crickets, you’d better start looking at the ingredient list of food products you buy. Be wary of food items with pictures of cricket players on the packaging, especially if the cricket players are saying something like, “Cricket is good for you” or “I love cricket and so will you. Just give it a try!”

One of the newest cricket-based products, coming to a store near you, is cricket bread. Well, it may take a while to get to your local food store, but it has at least been introduced to the world market. Fazer, a Finish bakery and food service company, recently launched the world’s first insect-based bread that’s commercially available. According to a Reuters report, the bread is made from cricket flour, as well as wheat flour and seeds. Each protein-packed loaf contains the equivalent of 70 crickets! An entire extended family of crickets in your bread!

“It offers consumers with a good protein source and also gives them an easy way to familiarize themselves with insect-based food,” Juhani Sibakov, head of innovation at Fazer Bakeries, told Reuters.

Cricket bread is destined to be a hit in India and other cricket-playing countries, especially when scientists conduct studies and determine that eating cricket improves your ability to play cricket.

It won’t be long before cricket bread and other cricket products are commonplace in supermarkets around the world. So next time someone tells you that he “eats, sleeps, and breathes” cricket, you may want to get a clarification.