Fun Time: Everyone Wants to be Neeraj Chopra 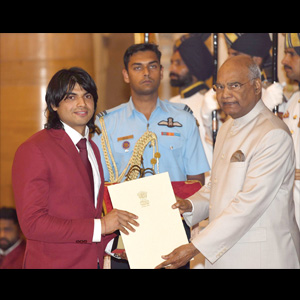 It was early evening on Aug. 7 and officials at the National Centre of Seismology were concerned about several tremors they had detected in Delhi, Haryana and other parts of India.

They were about to issue an earthquake warning when they found themselves contributing to the tremors themselves, jumping up and down as the exciting news flashed across a TV screen in their office: “Neeraj Chopra Wins Gold in Javelin.”

A young woman named Megha jumped into the arms of a young man named Raj. She didn’t follow sports closely, but after seeing everyone in the office hugging each other and cheering, she thought this would be a good opportunity to hug Raj.

“I love gold!” Megha yelled, remembering all the hours she had spent at jewelry shops.

Neeraj Chopra has scored a gold for India!”

“Yes!” Megha said. “We have the best javelin player in the world.”

“Have you ever thrown it?” Megha asked, trying to distract Raj from her mistake.

Raj had never thrown a javelin, but he saw an opportunity to impress Megha. “Yes, many times,” he said. “In fact, I am a member of the Delhi Javelin Club.”

“You have your javelin here?”

“No, but I have my umbrella. When it’s closed, it’s just like a javelin, with a sharp point and all.”

Raj grabbed his long black umbrella and opened the door for Megha. To his surprise, there were already dozens of people throwing umbrellas, sticks and other objects outside. Most of them were youngsters, but Raj even spotted an old man hurling his walking stick as far as he could. “Do they have over-80 javelin competition?” he asked his wife, as she went to fetch his stick. “I can win gold, too.”

Two teenaged girls were throwing a hockey stick around.

“I’m Neeraj Chopra,” one girl said. “The best javelin thrower in the world.”

“No, I’m Neeraj Chopra,” the other girl said. “The best-looking javelin thrower in the world.”

The first girl laughed. “He is handsome. I wonder who is going to play him in the movie?”

Hearing the conversation, Raj and Megha smiled at each other. They walked down the street to find a safe area where Raj could throw the umbrella. They stopped about 20 meters from a roadside stand where a man was selling live chickens in a cage. Raj put all his strength into the umbrella throw, almost falling over as he released it.

“Wow,” Megha said, as the umbrella soared through the air. A gust of wind caught it, carrying it farther than Raj had expected.

Luckily, the umbrella fell a yard short of the cage. Even so, Raj had to face the wrath of the roadside seller.

“Who do you think you are, throwing like that?” the man shouted. “Neeraj Chopra?”

The next day, Megha received a call from her father, Ravi. “I have some good news,” he said. “I’ve been appointed the chairman of a new commission.”

“The Special Commission to Build One Thousand Neeraj Chopra Statues.”

“Only one thousand, Papa?”

“This is for Haryana only. Other states will build more.”

Megha told her father about the javelin thrower she had met.

“When can you bring him home?”

“You want to meet him already?”

“Why not? Please tell him to bring his javelin. He can show me how to throw it.”