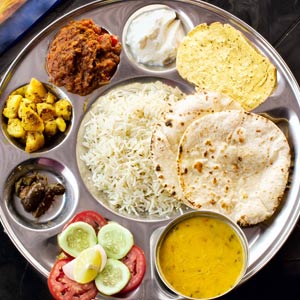 My family and I recently drove from Chicago to Boston, a 14-hour trip that involved several stops at fast-food restaurants.

Fast-food joints such as McDonald’s, Subway, Wendy’s, and Taco Bell could be found everywhere and were heavily advertised on the highway. Even before we knew the name of a town we were travelling through, we knew which fast-food restaurants it had. Any town that didn’t have a McDonald’s or Subway might as well call itself a village and withdraw its request for a dot on the map.

We enjoyed some of the fast food, but midway through our journey, when we approached the city of Buffalo, we were eager to eat something other than burgers, subs, and burritos. We didn’t have much hope though, especially since it was past 10 p.m., too late for most independent restaurants to be open.

I took a chance and headed downtown, hoping for a surprise. And boy did we get one. Halfway down a one-way street, my wife, Malathi, shouted, “Chennai Express! I can’t believe it! There’s a Chennai Express here!”

Keeping my eyes on the road, I had zoomed past the restaurant and had to drive around the block to return to it. Malathi feared that it was already closed for the night, but wanted to at least take a photo of it. It was like spotting a kangaroo on the side of the street.

I was excited to see a Chennai Express, but would have been just as excited to see a Hyderabad Express, Punjab Express or Patna Express. Any type of Indian meal was a welcome change to what we had been eating during our trip. I was even eager to try Dharavi Express.

We were soon enjoying a meal of idlis, dosas and puris, along with goat and chickpea curry. I wish I could have put a big sign on the highway to let other travelers know that there was a Chennai Express in the downtown area and they didn’t have to settle for fast food.

“Why eat burgers and fries when you can have puris and channa masala?” the sign would say. “That’s like wearing jeans and a T-shirt when you can wear an Armani suit.”

But I knew, of course, that most Americans would have a common response to my sign: “Anyone feel like Indian food? Me neither. Oh look! There’s a McDonald’s over there. We haven’t had burgers and fries in at least three hours.”

Many Americans have learned to appreciate Mexican and Chinese food, but Indian food just hasn’t won over their taste buds. Every big city does have dozens of Indian restaurants, but few of them would stay afloat without Indian-American customers. Getting other ethnic groups to visit is such a challenge for some restaurant owners that they even say “Please come again!” to the health inspector.

A few of these restaurants have tried to “Americanize” their menu, but with limited results. Somehow Americans haven’t lined up to try “dal makhani on a bun,” “bacon-and-sausage dosa,” and “pizza vindaloo.”

I’m not sure what’s more improbable: an Indian restaurant flourishing as a national chain or Bobby Jindal being elected president. Most Americans would agree, however, that one is definitely harder to stomach than the other.