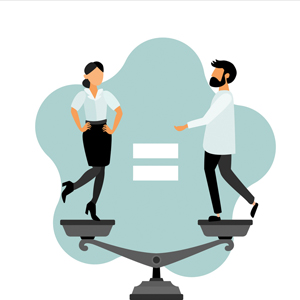 Many Americans were excited in 2020 when they elected their first female vice president. Meanwhile, many Indians were remarking to themselves, “Such a backward country, America is. We elected a woman as prime minister more than 50 years ago!”

America may indeed be trailing India in some respects when it comes to female leadership. Not only does India have several women in powerful political positions, a recent Pew Research Center survey of about 30,000 adults throughout India shows that Indians possess a highly favorable view of female leadership. Only 25 percent of Indians say that men make better political leaders than women, but these Neanderthals are partly balanced out by another group: the 14 percent of Indians who say that women make better political leaders than men.

The majority of Indians, 55 percent, say that women and men make equally good political leaders. But these progressive views do not necessarily extend to domestic life. Almost nine out of every 10 Indians agree with the statement “A wife must always obey her husband.”

In other words, the vast majority of Indians believe that a woman is highly capable of being a chief minister (or governor), but if she’s married, her husband is really the one in charge.

Chief Minister: “Tomorrow I’m going to write to the Prime Minister requesting him to create new guidelines for our students returning from Ukraine.”

Husband: “No, tomorrow you must cook chicken biryani for me. It’s my birthday and your biryani is my favorite.”

CM: “Okay, day after tomorrow, I will write to the Prime Minister.”

Husband: “No, day after tomorrow, you must take my mother shopping for a new handbag.”

CM: “Why don’t you do it? You are just sitting around giving orders.”

Husband: “Who do you think you are, talking to me like that?”

CM: “I am the Chief Minister!”

Husband: “Well, I am the Chief Minister’s husband!”

Perhaps they believe that some women, such as those who are chief ministers, are exceptional and do not have to be subservient to their husbands. Or perhaps they believe that a husband’s dominance does not extend beyond family business. He cannot, after all, show up at his wife’s workplace and order her around, whether or not she’s a chief minister.

Client: “Why did you make my website’s background blue and yellow? I told you that I preferred red.”

Designer: “It was my husband. He said I should make it blue and yellow to show support for Ukraine.”

While men may have the final say in household matters, many Indians are open-minded about some gender roles in the home. For example, more than 60 percent of them say that both men and women should be responsible for taking care of children.

Of course, men and women take care of children in different ways. If a 12-year-old boy kicks a football inside a home and breaks something valuable, his mother may summon his father: “Your son broke my favorite vase. Please take care of him.”