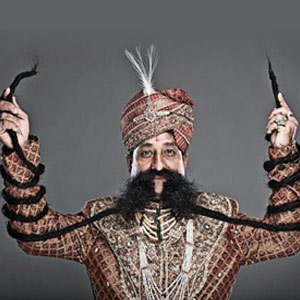 If there was a world record for number of newspaper articles about one country’s world records, India would probably have it. Not only have Indian newspapers written about the innumerable world record holders in the country, so has the Western media. The latest example comes from the New York Times Magazine, which published a feature by Samanth Subramanian entitled “Why India is obsessed with weird world records.”

According to Subramanian, “nearly a tenth of all Guinness World Records submissions now come from India.” That’s hardly surprising to me, considering that India has more than a sixth of the world’s population, and a large proportion are youngsters who don’t mind spending their time typing with their noses to set a world record.

If anything, we should be wondering why India isn’t sending more submissions to the Guinness World Records. The government needs to appoint a special committee to investigate this. We need to find out where all the submissions are coming from, and whether one or two states are lagging behind the others. Perhaps Punjab is getting a little too carried away with the Olympic Games and not spending enough time on the Guinness World Records. It would be a real shame if someone outside Punjab holds the record for non-stop bhangra dancing.

I’m not sure who holds that record, but according to the Guinness website, the Art of Living Foundation in Ludhiana set the world record for the largest bhangra dance on November 11, 2010, with 2,100 participants. That doesn’t seem like a lot of people, but perhaps every participant is required to demonstrate a certain amount of bhangra skill. You can’t just go to the railway station in Amritsar and say, “Come on, everyone! Let’s bhangra!’

Subramanian reports that many of India’s world records involve mass participation, such as the most simultaneous handshakes (two million people), biggest blood drive (61,902 donors), and largest motorcycle pyramid (201 men and 10 motorcycles). I haven’t confirmed this, but I’m pretty sure India also has the world records for most passengers on a single bus (1,042), most bathers in a river (2.6 million), and most participants in an angry mob (6.5 million).

Holding a Guinness World Record is an impressive feat, but with 40,000 records in the Guinness database, some are obviously more impressive than others. I’m proud that an Indian, Ram Singh Chauhan, has the longest mustache ever (4.29 meters long), but not so proud that another Indian, Radhakant Bajpai, has the longest ear hair ever (12.5 centimeters). And please forgive me for not being interested in any other body hair records.