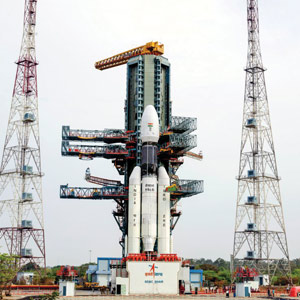 The Indian Space Research Organization (ISRO) unveiled a spacesuit at the recent Bengaluru Space Expo, creating much excitement in the Indian space community. The spacesuit is what astronauts will wear during India’s first manned space mission in 2022.

Let me clarify that: the mission won’t just be manned—it will also be womanned. The three-person crew on the space flight Gaganyaan is expected to consist of two men and one woman.

They will not be the first Indians in outer space, of course. That distinction belongs to Rakesh Sharma, who went into space in 1984 through pure Indian ingenuity: he traveled to Russia, learned the language, and snuck aboard the Soviet rocket Soyuz T-11. By the time the Soviets discovered him, it was too late.

Actually, Sharma went into space through an agreement between ISRO and the Soviet space program. He spent 7 days, 21 hours, and 40 minutes in space. Upon returning home, he met then-Prime Minister Indira Gandhi, who asked him how India looked from outer space. “The best in the world,” he replied, and that was the last time the Russians invited an Indian to travel with them.

Since then, the Indian space program has made great strides, launching numerous satellites into space and sending Chandrayaan-1 to the moon and Mangalyaan to Mars. Each of those was an unmanned mission, intended to gather vital information. Before Indians can consider living on another planet, they need to find out important details, such as whether chili plants can be grown there.

ISRO is now preparing to take the next step: sending humans into space. The trio of astronauts will spend seven days orbiting the earth at an altitude of about 400 km. Looking down on earth from that altitude, they will be able to see only a few landmarks, such as the great pyramids of Egypt, Mount Everest, and Mukesh Ambani’s house.

The three astronauts have not been selected yet, but will come from the Indian Air Force and ISRO. Rakesh Sharma, in case you’re wondering, is now 69, retired from the Air Force, and probably not interested in returning to space. He may change his mind, however, when he’s 78 and can participate in the Indian pastime of breaking world records. (The late John Glenn was 77 when he became the oldest person to travel in space in 1998.)

Sharma will surely be excited to watch the launch of Gaganyaan, quadrupling the number of Indians who have been to space. The astronauts will wear bright orange spacesuits that have four layers and weigh less than 5 kg. Each suit is equipped with an oxygen cylinder that allows an astronaut to breathe for an hour outside a spacecraft. I’m not sure if the spacesuits are equipped with charging stations for cellphones, but if not, ISRO may have trouble getting young people to join the astronaut program.

It’s quite an honor to be selected as an astronaut, but it also takes a lot of courage. Anytime you leave the earth, you are putting your life at risk. Not only do you have to worry about potential equipment failure, you also face the risk, however slim, of encountering space aliens.

Just getting on an airplane makes me nervous, so I can’t imagine being in a spacecraft headed to outer space.

Fellow astronaut: “Don’t worry, the launch will be over in 15 minutes. We are just orbiting the earth.”

Me: “Has this ever been done before?”

Astronaut: “Yes, several times. But not by India.”

Me (trembling): “Is it too late to change my mind?”

We are making history. Even if we are unable to return to earth, we will have made history.”