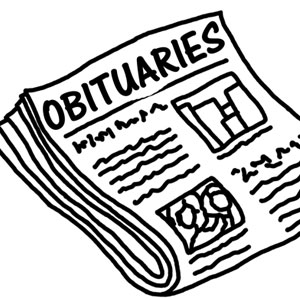 Years ago, obituaries in newspapers contained just the usual run-of-the-mill details: name and age of the deceased; occupation, accomplishments, and hobbies; a long list of survivors; and funeral arrangements. Now and then, you’d spot something interesting in an obituary, such as the fact that a man loved his favorite baseball player, Barry Bonds, so much that his dying wish was not only to be cremated while wearing a Bonds jersey, but to have his ashes kept in a replica of a syringe.

These days, with paid obituaries becoming the norm in many newspapers, obits are limitless in their potential for creative expression and entertainment. Whatever “last word” a person wants to have, newspapers rarely stand in the way, even if the “last word” is something utterly ridiculous, such as “The world is flat” or “Donald Trump would make a great president.”

A recent example comes from New Jersey, where the last line of Elaine Fydrych’s obituary states, “Elaine requests, ‘In lieu of flowers, please do not vote for Hillary Clinton.’”

The 63-year-old woman, a Democrat, wasn’t happy with the presidential candidate’s performance as Secretary of State, in particular her handling of the 2012 Benghazi attack.

Fydrych “wanted to go out with a punch, and I think she did that,” her husband, Joe, told the Associated Press. Indeed, she landed a punch right into Clinton’s gut.

It’s not the first punch Clinton has taken from the dearly departed. Last April, the obituary of a North Carolina man, a lifelong Republican named Larry Upright, stated that his family “respectfully asks that you do not vote for Hillary Clinton in 2016.”

More recently, a Miami woman named Nancy Dearr used her obituary to show support for one of Clinton’s rivals, stating that “in lieu of flowers, donations may be made to the Bernie Sanders presidential campaign.”

Dead folks showing their opposition to Hillary Clinton may not seem like a big deal, but it must be a major concern for Clinton’s campaign staff, who can’t be pleased that their candidate is lagging behind in dead voter polls.

Turnout at a number of elections in America would be abysmal if not for dead voters. (The politically correct term for such voters is PC—pulse-challenged). In New York State alone, about 26,000 PC voters are officially registered to vote, and hundreds of them have actually cast ballots. This means, of course, that Larry Upright won’t need to be upright to vote against Clinton in 2016.

While some people share their political affiliations in their obituaries, others express their allegiance to sports teams. The 2013 obituary of Scott E. Entsminger, a lifelong Cleveland Browns fan, includes this line: “He respectfully requests six Cleveland Browns pall bearers so the Browns can let him down one last time.”

One of the most entertaining obituaries in recent years was that of a Pennsylvania man named Kevin McGroarty who “died Tuesday, July 22, 2014, after battling a long fight with mediocracy.”

McGroarty, according to the obit, was “preceded in death by brother, Airborne Ranger Lt. Michael F. McGroarty, and many beloved pets: Chainsaw, an English Mastiff in Spring 2009; Baron, an Irish Setter in August 1982; Peter Max, a turtle, Summer 1968; along with numerous house flies and bees, but they were only acquaintances.”

The obit also stated that “McGroarty leaves behind no children (that he knows of)” and that, after studying various religions and Greek philosophy, he wanted to leave behind some wisdom for everyone to ponder: “It costs nothing to be nice,” and “Never stick a steak knife in an electrical outlet.” Please don’t stick a knife in Hillary Clinton’s presidential aspirations either.