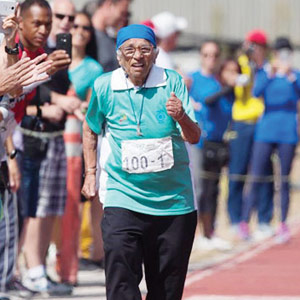 Most people dream of retiring in their sixties and taking it easy. Some of them might want to keep working, but by the time they reach their seventies, they’re ready to relax, drink tea, and reminisce about the good old days. Ask them if they’d like to do any running and they might nod their heads and say, “I’ve thought about running. In India, you’re never too old to run, as long as you’re running for office.”

But ask them if they’d like to do the other type of running and they’d probably laugh and say, “Only if a lion is chasing me.”

That’s why Man Kaur, the 101-year-old world champion from Chandigarh, is so amazing. She took up running when she was 93! Most people that age have trouble walking, let alone running.

Just pick a 93-year-old woman in India at random and ask her if she runs. She’ll probably smile and say, “I ran once, but it was a long time ago. … Oh yes, it was during the partition. I ran from Pakistan to India.”

Kaur started running upon the urging of her son, Gurdev, who is now 79 and competes in Masters events, like his mother.

“I asked her. ‘You have no problem, no knee problem, no heart problem, you should start running,’” he told The Canadian Press. “She could become prominent all over the world.”

She has indeed become “prominent” all over the world. If people in Burundi see a newspaper article with a headline such as “Man From India Wins Another Gold Medal,” they know right away that it’s all about Man Kaur.

Kaur, as you’ve probably heard, was the only female centenarian competing at the recent World Masters Games in Auckland, New Zealand, and won the gold medal in the 100-meter dash by completing the race in one minute, 14 seconds. Well, it wasn’t exactly a “dash”—it was more like a “stroll.” But when you’re 101 years old, any type of measurable movement is worth applauding.

Competing only against herself, Kaur was both the first runner to cross the finish line and the last runner to do so. But it’s not her fault that no other centenarians decided to show up. What was she supposed to do—go to a retirement home and challenge all the residents in their 100s to a race?

Hundred-year-old woman: “What will I win if I race you?”

Hundred-year-old: “How long do I have to run?”

Kaur: “100 meters. One meter for every year you’ve lived on this earth.”

Hundred-year-old: “That’s too long. Let’s do one meter for every decade I’ve lived on this earth.”

Kaur didn’t just win gold in the 100-meter race; she also won gold in 200 meters, shot put, and javelin. She threw the javelin 5.12 meters and heaved the shot put 2.1 meters. Can you believe that—a 101-year-old woman heaving a shot put that far? Most people her age wouldn’t be able to lift the shot put off the ground— and if they succeeded in doing that, they’d probably fall backwards under its weight, shouting, “Help! Someone get this heavy round thing off me!”

Kaur is truly a marvel. She has now won 20 gold medals at World Masters events around the world and shows no sign of slowing down.

“I feel really good winning all four gold medals and this is not it, I will come back and compete again at the Master Games 2021 in Japan,” she told the Indian Weekender.

In 2021, she will be 105 years old. Imagine how many people she will inspire to take up running.

Seventy-year-old woman: “Look at her run. I’m really inspired. Do you want to go for a run with me?”

Seventy-two-year-old woman: “Yes, but not now. We still have time.”

Seventy-year-old woman: “That’s true. If she started running in her nineties, we still have 20 years to relax.”