FUN TIME: NEVER TOO LATE FOR A MATRIMONIAL AD 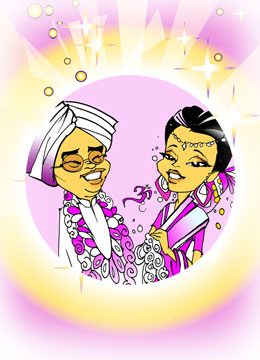 The Associated Press certainly found it newsworthy when the father of a businessman in Salt Lake City placed a newspaper ad seeking potential brides for his son.

Arthur Brooks, a 78-year-old Jewish man, spent $900 on the matrimonial ad, quite a lot of money. But this was no ordinary matrimonial ad. It was a full-page color ad, the type of ad companies place to sell products. In this case, the product was a 48-year-old man named Baron Brooks.

I know what you’re thinking: “He’s 48? Why did his father wait until he was 48 to place a matrimonial ad?”

For the typical American parent, the drastic measure involves nudging their son off the couch. “Go out and ride your bicycle or something,” they say. “You might run into some nice women.”

Sometimes they go a step further. They set their son up on a blind date with a single woman. This rarely works, of course. There is a reason their son is still single: He’s a jerk.

Well, he might be a jerk, or he might be the type of man who doesn’t want to settle down. He enjoys being single, even if he doesn’t admit it. Being single means not having to answer to anyone, not even the voice in your head that says, “Isn’t it time for you to take your monthly bath?”

Arthur Brooks is obviously not the typical American parent. Not only did he place a matrimonial ad for his businessman son, he made it sound like his son had placed the ad himself. “I am looking for a wife who is ready, willing, and able to have children as soon as possible,” the ad stated, making it clear that any woman who becomes his wife would be primarily valued for her ability to bear children. The ad listed some preferences that weren’t quite mandatory: “You will probably be between the ages of 34-38 but that can be flexible.” (No, you can’t be 48, but if you’re 28, we’re flexible.)

“You will be attractive, being height and weight proportional,” the ad continued. “Ideally, you will have no children from previous marriages, but that is also flexible.”

It’s certainly refreshing to see the words “ideally” and “flexible” in a matrimonial ad. Those words sometimes appear in Indian matrimonial ads, but it’s usually in a sentence such as this: “Ideally, you must be fair, slim, and beautiful. If you are flexible, too, that is good.”

But before you think that Baron Brooks is the ideal bachelor, you’d better hear the last part of the ad: “You must be politically conservative. This is very important to me. If you voted for Obama or plan to vote for Hillary, you are not for me.”

Now you know why Baron Brooks is still single. If women who plan to vote for Hillary Clinton are immediately crossed off his list, then perhaps he’s limiting himself too much.

It has been many years since I placed a matrimonial ad, but I don’t think I ever wrote something such as this: “If you plan to vote for Abraham Lincoln, you are not for me.”

Baron’s father plans to interview about a dozen women who responded to the ad. Those who get through the interview stage may get to meet Baron. Ideally, they will first have to pass a fertility test. But that is flexible.