Fun Time: NO ANIMALS IN MY PANTS PLEASE 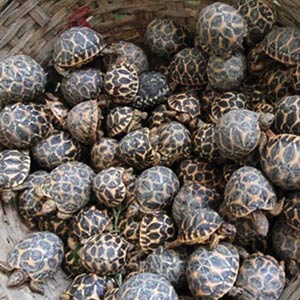 If you had a choice between smuggling a human or an animal into a country, which would you choose? Well, it depends on size, doesn’t it? I would never try to smuggle an elephant or rhino across a border, nor would I try to smuggle LeBron James. Large animals or humans would be just too easy for a border official to spot.

But there is a benefit to smuggling a large animal – or even a medium-sized one, such as a dog: you can’t stuff it in your pants.

I’ve never smuggled any type of animal, but if I did, the last place I’d want to put it is in my pants. But that seems to be the modus operandi of many smugglers, who apparently don’t value certain parts of their anatomy as much as I do.

A 27-year-old Canadian man named Kai Xu was recently caught trying to smuggle 51 turtles from the United States. Canadian border authorities found the turtles inside his pants, taped to his legs. Taping the turtles to his legs kept them from moving around, but also prevented Xu from claiming his innocence: “Oh no! How did all these turtles get in my pants? That’s the last time I ever dry my pants on the grass.”

Smuggling turtles in your pants sounds unpleasant, but it’s far more pleasant – and much safer – than smuggling snakes. A man was arrested at Miami International Airport in 2011 with seven snakes in his pants. I can only imagine the conversation he had with the security officer who caught him.

Smuggler: “Why are you arresting me? Did I do something wrong?”

Officer: “Yes, you had seven snakes in your pants.”

Smuggler: “Seven snakes? Oh my God! Thank you so much for finding them! You saved my life!”

Officer: “Do you know how they got there?”

Smuggler: “It must be my ex-wife. She’s always out to get me.”

I would never put a snake in my pants, even if it was stuffed in a bag. I’ve always had a fear of snakes and the idea of having a snake so close to certain parts of my anatomy would terrify me. I wouldn’t be able to move. Someone would have to carry me through security and onto the plane.

Officer: “What happened to him? Why is he so stiff?”

Airport aide: “It looks like he has some kind of swelling in his leg.”

Perhaps I’m just not cut out to be a smuggler. Animal smugglers need to be courageous, and they can’t monkey around, even if they’re carrying monkeys.

In 2008, an American woman named Gypsy Lawson claimed to be pregnant and smuggled a rhesus monkey under her blouse. Passengers on her flight from Thailand to America were not suspicious at all, even when the unborn baby stuck its hairy hand out and grabbed a bun from the food tray.

In 2002, an American man named Robert John Cusack, returning to his homeland from Asia, drew the attention of customs agents when an endangered bird flew out of his luggage. When the agents asked him if he had anything else to declare, Cusack said, “Yes, I’ve got monkeys in my pants.”

He had only two monkeys in his pants, but that exceeded the monkey import limit of zero. The monkeys were lorises, tiny primates found in the forests of India, Sri Lanka and a few other Asian countries. As nocturnal animals, they’re active when it’s dark, which may explain why Cusack also had a flashlight in his pants.

Having monkeys in your pants certainly beats having snakes in your pants, but all things considered, I’d rather keep my pants animal-free.