Fun Time: Ride A Bicycle and Help the Environment 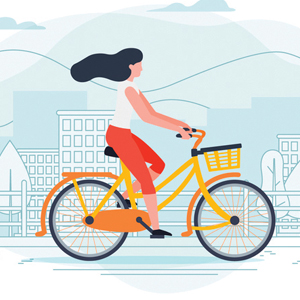 My wife, Malathi, does not like to drive. Her car remains parked on our driveway 99 percent of the time. Malathi drives it only on weekends, usually to go shopping and to ensure that raccoons and other creatures do not start living inside the engine compartment.

Malathi has two preferred modes of transportation: cycling and walking. Only if she’s unable to use one of these modes does she resort to a third mode: Huber.

Huber is what you get when you combine husband and Uber.

Yes, if Malathi is unable to bike or walk, she usually gets me to drive her. Did I mention that her car sits idle 99 percent of the time?

Our house, thankfully, isn’t far from the university where Malathi works. It’s one of the main reasons we bought the house. Malathi can pedal to work in just 12 minutes. It’s mostly a downhill ride, but uphill when she returns home, so she praises gravity in the morning, curses it in the evening.

By riding her bicycle, she gets a little exercise, fresh air and the ability to ride on pavements, often passing motorists stuck at traffic lights. She also saves money on gas and does her small part in reducing air pollution and helping the environment. She doesn’t have to worry about parking—there is plenty of space on the bike rack outside her building, and no risk of anyone accidentally backing up into her bike.

Many people around the world ride bicycles out of necessity—they can’t afford to buy cars, motorbikes or scooters. But even in wealthy countries, bicycles are increasingly popular, not just for recreation but also transportation. In Denmark, for example, more than 90 percent of the population own bikes, compared with about 60 percent who own cars. The country has promoted biking by building a vast network of bike lanes and bike highways, and by imposing heavy taxes on gas and automobiles. Heading home from the office at rush hour, you might find yourself stuck behind dozens of bicycles. You’ll feel like you’re in the Tour de France, but with hardly anyone on steroids.

Most people do not live close enough to their workplaces to use bicycles. But short errands within their neighborhoods can easily be done on pedal power. More towns and cities need to create bike lanes to encourage people to ride bicycles and to keep them safer. Too many cyclists, unfortunately, have been struck by cars while riding on the side of busy roads.

Many accidents are also caused by cyclists who don’t take enough precautions, whether it’s riding too fast, forgetting to apply the brakes, or failing to wear helmets. I always wear a helmet these days, partly because I’ve fallen off bikes several times. The worst fall occurred in my college days. I fractured a bone in my right hand, but the attention and sympathy I received while wearing a plaster cast almost made it worth it. That’s what’s great about being young – nobody faults you for being reckless. But if you hurt yourself when you’re older, your wife will shake her head and say, “What an idiot you are.”

My most recent fall occurred a few years ago, when I was riding a little too fast as I approached an intersection. My rear brakes weren’t working well, so I squeezed my front brakes, which caused the bike to throw me off like an angry horse. I injured one of my fingers and scraped my knee. It took me more than month to recover from the fall. To this day, my finger still hurts and the word “idiot” still rings in my ears.

Despite my falls, I’m a big fan of the bicycle. It’s one of the greatest inventions in history. Not only does it give us cheap transportation, it also gives us enjoyment and exercise—all without polluting the earth.