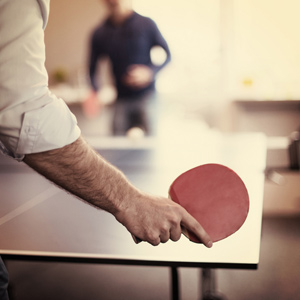 I played several sports in my younger days, but only two of them required me to hit a ball over a net: tennis and table tennis. These two sports are so alike and yet so different.

Tennis is played outdoors on a “court,” a surface that can be made of clay, cement, or even grass. Weather is always a factor: it’s no fun playing tennis in the rain, especially if you slip and pull a muscle.

Table tennis, on the other hand, is not a sport where you’re likely to pull a muscle. But that doesn’t mean you can’t hurt yourself. The sport is played indoors, and if you get carried away trying to return a ball, you might run into a wall.

Table tennis, of course, requires a table, but you can usually manage without any chairs. Tennis, on the other hand, requires chairs. Indeed, have you ever come across a professional tennis match that didn’t have chairs? The players sit on chairs during breaks, while the umpire is always sitting in a chair.

A regulation table for table tennis has specific dimensions: 274 cm in length, 152.5 cm in width and 76 cm in height. But the most common table many kids play table tennis on is the dining table. It is neither long enough nor wide enough, but as long as the net is in the middle, your opponent has no advantage and you can enjoy the game immensely—at least until you accidentally break your mother’s vase and she accidentally breaks your head.

Tennis requires you to expend a lot of energy, unless you are playing doubles in the over-50 league. Table tennis may also require exertion, but only if you are playing against Fan Zhendong of China.

If you’re lucky enough to face Zhendong in a match, you are likely to be sweating profusely. He will make you move around so much, your muscles will ache the next day.

Zhendong is the No. 1 men’s table tennis player in the world, but if you have actually heard of him before, you must be a table tennis aficionado. The top male tennis player, Rafael Nadal, is so famous, he can’t walk down the streets of Bhubaneswar without being mobbed.

If you’re an Indian sports fan and hadn’t heard of Zhendong, you can be forgiven. But what about Sathiyan Gnanasekaran and Sharath Kamal?

They’re the highest ranked Indian table tennis players. Gnanasekaran is ranked No.30 worldwide and Kamal is No. 36. If that isn’t impressive enough, the duo are part of the Indian men’s table tennis team that recently achieved a world ranking of No.9, their highest ranking ever.

At the 2018 Commonwealth Games in Australia, the Indian team of Gnanasekaran, Kamal, Anthony Amalraj, Harmeet Desai, and Sanil Shetty won the gold medal, while Gnanasekaran and Kamal won silver in men’s doubles, and Kamal won bronze in men’s singles.

Perhaps you follow table tennis closely and already know about the success of the Indian men’s team. I wasn’t aware of this and was pleasantly surprised. But perhaps I shouldn’t have been surprised. After all, table tennis was invented in India.

Well, it’s not a proven fact, but according to Wikipedia, “it has been suggested that makeshift versions of the game were developed by British military officers in India in around 1860s or 1870s, who brought it back with them.”

So just like they did with other items of value, the British took table tennis back to Britain with them?

Thankfully, a sport is not like gold and diamonds— you can’t actually take it from a country. Table tennis remained in India in some form or another, and we are all richer for it.