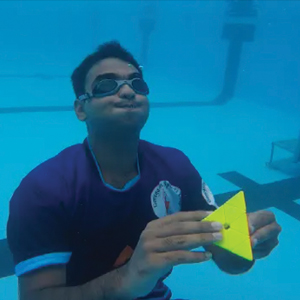 India has a population of almost 1.4 billion, so it shouldn’t be surprising that some Indians are absolutely amazing. Their athletic prowess makes me shake my head and wonder why Abhinav Bindra is still India’s only individual Olympic gold medalist.

The most recent Indian to amaze me is Laithangbam Vidyasagar Singh, a former weightlifter from Manipur. Singh set a Guinness World Record by doing 85 four-finger pushups in one minute.

Before watching a YouTube video of Singh’s achievement, I would have found it almost impossible to believe. Not only did he complete 85 pushups in one minute, he accomplished this feat using just two fingers in each hand.

Eighty-five pushups in one minute? I can’t do 85 pushups in one day. And forget about using my fingers. I can barely type with two fingers. Balancing my entire weight on them would produce only one result: a visit to the emergency room.

“I have been practicing this since I was in Class 6,” Singh told the news agency ANI. “I focused on physical training and practiced pushups a lot.”

It’s worth noting that the previous world record was also held by an Indian. Dinesh Sharma did 70 four-finger pushups on April 1, 2018, in Uttarakhand.

Unfortunately, four-finger pushups is not yet an Olympic event; otherwise India would sweep all the medals in the event and Singh would join Abhinav Bindra in the pantheon of Indian Olympic heroes.

After Singh returns from the Olympics with a gold medal around his neck, millions of children will take up the sport of four-finger pushups, and India would set another Guinness World Record: most X-rays of broken fingers in one day.

I’m not sure how many Guinness World Records have been set by Indians over the last 20 years, but I’m sure it exceeds the number of Olympic medals India has won. Of course, many of these records do not require the type of athleticism that an Olympian might possess. For example, in early 2018, a couple from the Puri district of Odisha, Jyotsna Mishra and Durga Charan Mishra, set a Guinness World Record for the longest journey by scheduled public transport in a single country. Using only government-run buses and trains, the Mishras traveled 29,119 km across India in 42 days.

Durga, a retired central government employee, was 66 years old and his wife 57 when they set the record, which required not athletic ability but endurance and determination.

If my wife and I went on a 42-day journey on public transportation, we’d be a married couple for only the first half of it. For the second half, we’d need separate compartments on the train.

At least a few of India’s world records involve the Rubik’s Cube. Arumugam P.K. of Tamil Nadu set a record by solving 1,010 Rubik’s Cubes while riding a bicycle, and Nikhil Soares of Mumbai set a record by solving 151 cubes while balancing on a caster board. Another Tamil Nadu man, Illayaram Sekar, solved only six Rubik’s Cubes, but he did it underwater. He was underwater for two minutes and 17 seconds while solving the cubes, taking no breathing breaks as he set a world record.

And the Mishras from Puri will set a record for most Rubik’s Cubes solved while taking scheduled public transport in a single country.